In the 7th century A.D. Kancheepuram and Mahabalipuram became the main centres for art under the Pallava rulers. The Pallava period marks the emergence of the earliest Dravidian style of temples. The Pallava architecture can be divided into two phases: wholly rock-cut (610-690 A.D.) and entirely structural (690-900 A.D.). 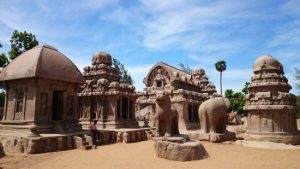 ​The rock-cut structures of the first phase took two forms: the ‘mandapas’ (610-640), and the ‘rathas’ and ‘mandapas’ (640- 690 A.D.) . A ‘mandapa’ is an open pavilion excavated in the rock that takes the shape of a simple pillared hall, while a ‘ratha’ is a monolithic shrine. Mahendravarman (600-630 A.D.) was the pioneer of rock-cut temples and is credited with building the five-celled cave temple at Pallavaram, the Satyagirinathar and Satyagirishwarar twin temples at Mahabalipuram, the Siyamangalam in North Arcot and the upper rock-cut temple at Tiruchirappalli, besides two Vishnu cave temples, the ‘Mahendravishungrha’ at Mahendravadi, and the ‘Ranganatha Temple’ in the present-day North Arcot district. Narasimhavarman I (625-645 A.D.), who took the title of ‘Mahamalla’, built the much acclaimed rock-cut temples, the ‘Pancharathas’ or the five ‘rathas’ at Mahabalipuram, which are sometimes called the “Seven Pagodas”. These are based on the concept of the Buddhist ‘Viharas’ and ‘Chaityas’ and are named after Draupadi, Arjuna, Bhima, Dharmaraja and Sahadeva. Of these ‘rathas’, the ‘Dharmaraja Ratha’ is the largest, while the one-storied Draupadi Ratha is the smallest and the most complete. Alongside the ‘rathas’ there is an exquisite rock-cut bas-relief structure called ‘Arjuna’s Penance’ or ‘Descent of the Ganges’. The ‘Shore Temple’ at Mahabalipuram, built by Narasimhavarman II (circa 690-715), is actually a twin-temple dedicated both to Lord Vishnu and Lord Shiva. 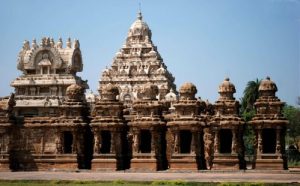 The structural temples of the Pallavas can be primarily divided into two groups: Rajasimha group (A.D. 690-c.800) and the Nandivarman group (800-c.900 A.D.). The famous ‘Kailasanatha Temple’, considered as the largest sandstone temple in the world, is the best representation of the Rajasimha group of temples, while the ‘Vaikuntha Perumal Temple’ is an example of the Nandivarman group. The early Shiva temples of the Pallavas were sparsely adorned in the interiors, but the later temples show exquisitely carved pillars depicting scenes from the Ramayana and Mahabharata.

It is interesting to note that the transition from wood to stone in the north Indian temples took place in the 3rd century B.C. during the reign of Ashoka but it took a millennium more in getting reflected in the south Indian temples under the Pallava rulers. Another typical feature that made its appearance in the Pallava architecture was the sedant ‘yalis’ or lions on the bases under Narasimha I and the rampant lion motifs under Rajasimha, marking the beginning of a pillar design.