Bommala Koluvu: It is the artistic display of toys and dolls by the women during the Dussehra festival.

Buda Budakkala:   It is a term given to the singing minstrels who go about from place to place after the break of dawn to awaken the people with a special prayer to goddess “Amba” followed by an invocation to the village deities.  This is particularly common in the remote villages of Srikakulam, East Godavari, Guntur, Prakasam and Nalgonda districts. Thbe buda budakkala minstrels are usually men and can be seen in the rustic villages singing, foretelling and getting alms in return. Popularly known as Ramjogis, Saayila vallu, Buda Budakkala vallu, their presence is a must in the villages during the harvest festival of Sankranti. The buda budakkala minstrel finds a mention in many of the Telugu literary texts. His style of dressing has also been vividly described in Ayyalaraju Narayanamatya’s “Hamsa Vimsati”.

Gangireddu Aata:  It is the name given to the “the bull play”, a very popular form in Andhra Pradesh, especially seen during Sankranti and Dussehra

festivals, where bulls are trained to dance or perform acrobatics to entertain the crowd. The bull master, belonging to the Yadava community, accompanies the bull playing the nadaswaram and the dhol. The Gangireddu Aata is perhaps one of the very few rural entertainments that have survived through times.

Haridaasu:   Haridaasu or Daasarlu is a form of devotional singing dedicated to Lord Vishnu, which is noticed more often during the Sankranti. The traditional haridaasu with his characteristic tambura in one hand and a chiratala in the other and a copper vessel on the head goes round the village singing devotional songs in praise of the Lord and seeks alms from every house. He renders popular devotional songs written by saint-poets like Bhadrachala Ramdas, Paramkusadas, Venkatadas and Hanumaddas. Since the haridaasus use any one of the varied musical instruments prevalent in Andhra Pradesh, there emerged different types of haridaasus like tambura haridaasu, ganta haridaasu, chiratala haridaasu and komma haridaasu. Over the years, people of different faiths and communities joined this group of haridaasus and there evolved various classes of these devotee minstrels like golla haridaasu, mala haridaasu and balije haridaasu.

Karra Saamu: It is the stick fight performed during village festivals and marriage processions by the men folk mainly in the villages of Guntur, Krishna, East and West Godavari districts. The performers use musical instruments like the dappu, “bigli” (whistle) and “taasha” which produces fierce inspiring noise. Sometimes the Karra Saamu experts fight with sticks that have flames burning at one end.

Oggu Katha:  This is a form of devotional singing practised by the Kumaras, a sub-sect of the Yadavas, in praise of Lord Shiva. Oggu Katha got its name from the invoking instrument, the “oggu”. In this, the traditional priests called oggus perform the marriage of Mallanna (family God) with Bhramarambha (deity) and narrate stories in their praise. The Oggu Katha team consists of 4 to 6 members with a chief narrator and instrumentalists. Oggu Katha is popular in the ballad tradition of Andhra Pradesh, especially in Telangana, because of the dramatization of its narration.

Sodi: It is the practice of fortune telling by women, which is prevalent in the Rayalseema regions. The sodis are both Vaishanavas (followers of Vishnu) 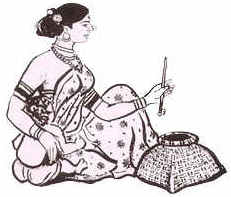 and Saivas (followers of Shiva). They are usually nomadic, wandering from one village to the other. They announce their presence in the villages by shouting.