Places of Cultural Importance (B)

Badami: Karnataka. Badami or Vatapi, the one time capital of the Chalukyas, is famous for its rock-cut temples built by the Chalukyas. Out of the five temples, three are Brahmanical, two are Buddhist and one is Jain.

Baidyanath Dham: Bihar. It is the Shiva temple at Deogarh which has been an important pilgrimage centre for centuries. According to legend, this is the place where Ravana rested on his way to Lanka after abducting Sita.

Bandhavgarh: Madhya Pradesh. This is a small National Park situated in Shahdol district and has the highest density of the tiger population in India. White Tigers, Indian bison, Sambar, Barking deer and Nilgai are common in the park.

Barabar and Nagarjuna Caves: Bihar. Located about 35km north of Gaya, the caves date back to period of Emperor Ashoka (the third century B.C). The Barabar Caves consist of temples and sanctuaries hacked out of huge granite outcrops and give details of the life of Buddha. The architecture of these rock-cut caves depicts the Ajivika sect of Buddhism. Two of the caves have inscriptions of Ashoka The Lomas Rishi cave is sculpted to resemble lattice screens. The Barabar Caves find a mention in E.M.Foster’s magnum opos ‘A passage to India’ as Marabar Caves. The Nagarjuna caves are smaller and younger than the Barabar caves.

Barhut:   Madhya Pradesh. It is famous for the Barhut Stupa built by the Sungas.

Basar: Andhra Pradesh. This place is famous for its Saraswati temple. Kashmir is the only other place besides Basar where a Saraswati temple is located. The temple at Basar is also the abode of Goddess Lakshmi and Kali. Hence, Basar is considered the sacred place of the divine trinity.

Belur: Karnataka. Belur, popularly known as ‘Dakshina Varanasi’ or ‘South Benaras’, is famous for the Channakeshava temple, built by the Hoysala King Vishnuvardhana in 1117 A.D.

Belur Math: West Bengal. It is the headquarters of Ramakrishna Mission Ashram, founded by Swami Vivekananda. Its architecture is an amalgamation of the Christian, Hindu and Islamic styles. 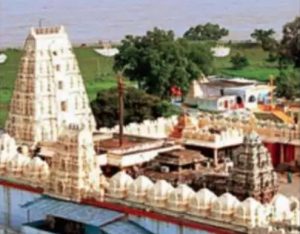 ​Bhadrachalam: Andhra Pradesh. This place, situated on the left bank of the river Godavari, is famous for the Sree Seetharamachandra Swamy shrine, where the 48 forms of Lord Vishnu are shown. The uniqueness of the temple is that the idol of Lord Rama has a bow on one side and also shanku and chakra showing two avatars – that of Lord Vishnu and Lord Rama. Also, unlike in other temples Sita is seated on Rama’s lap. Located close to the temple is the Ushnagundam which is believed to the place from where Lakshama had brought hot water for Sita to bathe. Also located about 35 km away from Bhadrachalam is Parnashala which is believed to be the hut where Lord Rama, Sita and Lakshaman lived during their exile in the forest and where Sita was separated from Lord Rama and taken away by Ravana.

Bharatpur: Rajasthan. Bharatpur is popular for its bird sanctuary, the Keoladeo (Ghana) National Park; the Bharatpur Palace, Lohargarh Fort (designed by Maharaja Suraj Mal, the founder of Bharatpur.), the three palaces of Kishori Mahal, Mahal Khas and Kothi Khas within the fort and the imposing towers of Jawahar Burj and Fateh Burj.

Bhimbetka: Madhya Pradesh. Bhimbetka is an archaeological treasure house and consist of the biggest repository of prehistoric art in India. Recent excavations here have revealed over 700 rock shelters belonging to the Neolithic age.

Bhiwani: The name ‘Bhiwani’ comes from goddess Gauri Bhawani. The place is described as ‘the Little Kashi’ since it has nearly 300 temples. Prithiviraj ki Kutchery (or Baradari), shrines of Khera Baba and Lohar Pir, Loharu fort and the Raja Khetri mosque and tomb are some of the well-known places in Bhiwani.

Bhoja Caves:  Maharashtra. These are 18 Buddhist caves located near Mumbai, built during the 2nd century B.C.

Bhopal: Bhopal, the capital of Madhya Pradesh, is situated on the 11th century city, Bhojapal, founded by Raja Bhoja. An Afghan soldier Dost Mohammed (1707-1740) established the present city. A succession of powerful Begums had ruled over Bhopal from 1819 to 1926. Important places in Bhopal include the Taj-ul-Masajid (said to be the largest mosque complex in India); Gauhar Mahal and Jama Masjid, built by Kudsia Begum in 1820 and 1837 respectively; Moti Masjid (built in 1860 by Sikandar Jehan, the daughter of Kudsia Begum); Shaukat Mahal; Sadar Manzil; Bharat Bhawan; Gandhi Bhawan; Van Vihar and Islamnagar (developed by Afghan ruler Dost Mohammed Khan, it is famous for the synthesis of Hindu and Islamic decorative art).

Bhuj: Gujarat. The old walled city of Bhuj is famous for its Museums, Ayanamahal, Cenotaphs and a Flamingo Sanctuary. Narayan Sarovar, near Bhuj, is one of the five holy lakes of the Hindu faith. Kera is renowned for the 10th century Shiv temple. Khoteswar is an ancient place of pilgrimage. The town came into the news recently after it was completely destroyed by a devastating earthquake on 26th January, 2001.

Bihar Sharif:  Bihar. This is famous for the tomb of the 14th century Muslim saint Makhdum Shah Sharif-ud-din.

Bijapur: Karnataka. The foundation of this historic city was laid during the reign of the Chalukayan Dynasty of Kalyani between 10th and 11th Centuries. Bijapur is famous for the Gol Gumbaz built by Adil Shah, the second largest dome in the world, which is 51m high and has a diameter of 37metres. Bijapur is also famous for the Sat Manzil, Ibrahim Roza, Bara Kaman, Mehtar Mahal, Nagar Khana and the Gagan Mahal. Ibrahim Roza is the tomb of Adil Shai Sultan Ibrahim II (1580-1627 AD).

Bisfi: Bihar. It is the birthplace of famous Maithili Poet Vidyapati.

Bodhgaya:  Bihar. Located 13 kms from Gaya town and situated on the bank of river Niranjana (Modern Falgu), it is the place where Lord Buddha attained the supreme enlightenment and became “The Buddha”, the enlightened one. The Bodhi Tree is the direct descendant of the original tree under which Buddha had attained enlightenment. A sapling from the original tree was taken to Sri Lanka by Emperor Ashoka’s daughter Sanghamitra when Ashoka took Buddhism to the island. The tree now flourishes in Anuradhapura in Sri Lanka. The170 feet high Mahabodhi Temple stands east to the Bodhi Tree with Chatras on its top. The main sanctum sanctorum has a colossal image of Buddha in a sitting posture touching the earth by his right hand. Vajrasana is the stone platform where Buddha used to meditate. Chankaramana marks the sacred spot where Buddha meditated during the third week after the pious enlightenment. It is believed that wherever Buddha put his feet lotuses sprang up. Animeshlocha Stupa is believed to be the place where Buddha spent one week looking towards the great Mahabodhi Tree out of gratitude, without blinking his eyes. Ratnagar is believed to be the place where five colours came out of his body. Sujata Asthan is the place where a young village woman approached Buddha and offered him bowl of rice just before his enlightenment. Numerous monasteries are located around Bodh Gaya. The prominent among these include the Thai temple; the Tibetan temple, which is a monastery belonging to the Gelug-pa (Yellow Hat) sect; the Karmapa monastery, the Daijokyo Japanese Monastery and the Indosan Nipponji temple. The Mahabodhi Sangharama built by the king of Ceylon in the fourth century A.D. is the earliest of the Buddhist monasteries built outside India. Bodh Gaya is also renowned for the Hindu Shankaracharya Math and the Dungeshwari and Surya temples.

Bomdila: Arunachal Pradesh. Bomdila, a peaceful unspoiled town set among apple orchards on a spur of the Thagla Ridge, has a couple of Buddhist monasteries and a small local museum.

Borra Caves: Vizag, Andhra Pradesh.These are the one million-year old beautiful and natural limestone caves located about 56 miles off Visakhapatnam and occupying an area of 2 square kilometers. The limestone caves were formed as a result of the action of the Gosthani River. 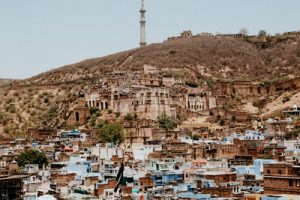 Bundi: Rajasthan. Bundi, a picturesque town surrounded by the Aravalli Hills, is famous for its magnificent palaces, forts and the royal cenotaphs. The Bundi palace presents one of the finest examples of Rajput architecture. The walls of Chatra-Mahal are adorned with artwork using gold. The famous Chitra Shala is also located in the palace and provides a colourful glimpse of history. Bundi is also known as the city of wells. It has about fifty beautiful tanks and step-in-wells called Baories. Of these, Raniji-ki-Baori or the Queen’s Baori is the best known for its architectural beauty.

Buxar: Bihar. It is believed that Lord Rama and Lakshmana had their earlier training here in the Ashram of Vishwamitra. The battlefield of Chausa where Sher Shah defeated the Mughal emperor Humayun is located nearby.