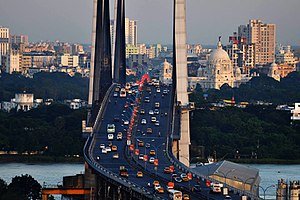 ​Calcutta: Calcutta (now called ‘Kolkata’), is a historical and culturally rich city. It is believed that the city of Calcutta was founded by Job Charnock in 1690, after buying the three villages of Sutanati,Gobindopur and Kolikata from a local landlord. The important places in the city include Academy of Fine Arts, Academy of Indian coins and History, Centre of International Modern Art (CIMA), Birla Industrial and Technological Museum, Birla Planetarium, Botanical Gardens (laid out in 1787 A.D., it is the largest and oldest of its kind in India), Burrabazar, Dakshineswar Temple, Dhakuria Lake, Eden Gardens, Fort William, Howrah Bridge, Kalighat Temple, Nandan, Nicco Park, Rat Park, Shaheed Minar, St John’s Church (dating back to 1784, the church houses the tombs of Job Charnock and his family), St Paul’s Cathedral (built in 1847) and Victoria Memorial (built between 1906 and 1921 in memory of Queen Victoria).

Calicut: Kerala. Calicut or Kozhikode was the capital of Zamorin Rajas. It was at Kappad, near Calicut that Vasco-da-Gama landed up in 1498.

Castella de Aguanda: Mumbai. This is a Portuguese fort which is declared as a heritage site.

Cellular Jail:  Andaman & Nicobar Islands. This is a three-storeyed prison, constructed by the British in 1906 at Port Blair in the Andaman Islands. This is a virtual pilgrim destination for freedom fighters. In this colossal edifice untold tortures were inflicted on freedom fighters and they were virtually incarcerated. These brutalities led to this place being referred as the Kalapani. It is here that Netaji Subhash Chandra Bose had hoisted the Indian tricolour on December 30, 1943. This place was declared as a “National Memorial” in 1979 and is called the Mukti Tirtha.

Chail: Himachal Pradesh. It was the summer capital of the erstwhile Patiala State. The Choor Chandni or the Choordhar gives a panoramic view of the picturesque hills and undulating ranges. The Chail Cricket ground is the highest cricket ground in the world.

Chamba:  Himachal Pradesh. Chamba was the ancient capital of the Pahari Kings and was founded in 920 A.D. by King Sahil Verma. The town is well known for its temples, which closely resemble the temples of Rajasthan and some of them characteristically have shikharas or spires. Some of the well-known temples are the Lakshminarayan temple, Katasan Devi temple, Mani-Mahesh Shikara temple, Hari Rai’s Dera and the Chamunda Devi temple.

Champaner: Gujarat. Champaner lies at the foot of Pavagadh Fort about 47 Kms form Vadodara. It was subjugated by Sultan Mehmud Berara in 1484 AD who made it his new capital. It is famous for the ‘Champaner Satyagraha’.

Chamundi Hills: Karnataka. Hills in Mysore whose summit bears the mighty temple of Chamundeshwari (Durga), the guardian goddess of the Mysore dynasty. It also houses one of the biggest statues of Nandi in India.

Chanderi: Madhya Pradesh. The place is famous for the Koshak Mahal built by Mohammed Khilji in 1445, the Jama Masjid, Shahzadi ka Rouza, Battisi Bandi and the Parameshwa Tal. Chanderi is also famous for its saris. 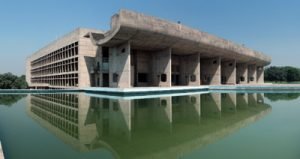 Chandini Chowk: Delhi. The Chandini Chowk or the Moonlit Square belongs to Shah Jahan’s times and was conceived by his daughter Jahanara. It is now a busy commercial area.

Chandrasarovar: Uttar Pradesh.  Also known as “Sur Kuti”, this place located in the Persauli Village, about 25 km from Mathura is the hometown of saint Surdas from where he composed works like Sur Sagar and Sahitya Lahiri.

Charminar: Hyderabad, Telangana. Often called “The Arc de triomphe of the East”, the Charminar was built in 1591A.D. by Mohammed Quli Qutb Shah. It is a beautiful structure with four intricately carved minarets built with granite and lime-mortar. The Charminar depicts the Indo-Saracenic tradition – a symbiosis of the Hindu and the Muslim traditions, which has woven the magic of a rich Deccani culture. 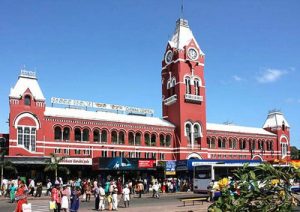 Chennai: Tamil Nadu. Popularly regarded as the ‘Gateway to the South’, Chennai (formerly known as Madras), the capital of Tamil Nadu, is the country’s fourth largest city. It was founded at Fort St. George in 1639 AD by Francis Day of the East India Company on a piece of land given by the Raja of Chandragiri, the last representative of the Vijayanagar rulers of Hampi. The city had interactions with different cultures since a long time, which is reflected in the use of many foreign names in the street names such as the China Bazaar Road, Armenian Street and Portuguese Church Street. Important places in Chennai include Fort St. George, Santhome Cathedral (it derives its name from St Thomas, the apostle of Christ who came to Madras during 52 AD), St. George’s Cathedral, St. Andrew’s Church, St. Mary’s Church (the oldest Anglican Church in the country, consecrated in 1679), Thousand Light Mosque, Marina Beach (the second largest in the world), Gandhi Mandapam, Anna Square, Snake Park, Theosophical Society, Valluvar Kottam (memorial of the poet-saint Tiruvalluvar), Ripon Buildings, Elliot’s Beach, Walajah Big Mosque, Ashtalakshmi temple, Kalakshetra or ‘Temple of Art’ (an internationally renowned institution of classical music and dance founded in 1936 by Rukmini Devi Arundale), Kapaleeswarar Temple (8th century Pallava temple, considered to be the biggest temple in Chennai), Parthasarathy Temple, Kandaswamy Temple, Vadapalani Temple, Gandhi, Rajaji and Kamaraj Memorials and the B.M. Birla Planetarium at Kotturpuram.

Cherrapunjee (Sohra): Meghalaya. Better known today as Sohra, Cherrapunjee is one of the rainiest places in the world. It is also famous for the Nohsngithiang falls, the Kshaid Dain Thlen Falls, Thangkharang Park and the Cherrapunjee Theological College.

Chidambaram: Tamil Nadu. Chidambaram (also known as Thillai) is an important pilgrim centre and a holy place for Shaivaites. The place is famous for the Nataraja Temple dedicated to Lord Shiva. The presiding deity of the temple is represented by air, one of the five elements of the universe and is known as Akash Lingam. The Sivakamiamman temple, the Sivaganga tank, Nritha Sabha court and the Thousand pillared-hall are other important features of the temple. The shrines of Govindaraja or Lord Vishnu, Subramanya and Ganesha are other sacred places in Chidambaram. The Annamalai University (founded by the Raja Sir Annamalai Chettiar), Neyveli, Gangaikondas Cholapuram, Pichavaram and Kalvarayan Hills are important places outside Chidambaram. Chidambaram is the site for the annual Nityanjali Festival.

Chitrakoot: Madhya Pradesh. Chitrakoot is regarded as the place where the principal trinity of the Hindu pantheon, Lord Brahma, Lord Vishnu and Lord Shiva, took their incarnations. Lord Rama and Sita spent 11 of their 14 years of exile in the deep forests of Chitrakoot and the great sages Atri and Sati Anusuya also meditated here. 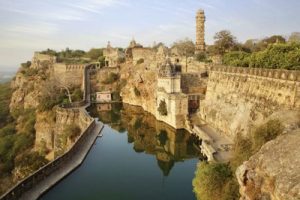 Chittorgarh: Rajasthan. Chittorgarh or Chittor was given to Bappa Rawal, the legendary founder of the Sisodia dynasty, as part of the last Solanki princess’s dowry in the middle of the 8th century. The massive Chittor Fort with its four main gates Padal Pol, Bhairon Pol, Hanuman Pol and Ram Pol, is a fine example of the Rajput architecture. The Vijay Stambh (Victory Tower) was built in 1440 A.D. by Rana Kumbha to commemorate his victory over the Muslim rulers of Malwa and Gujarat. The Kirti Stambh (Tower of Fame), built in the 12th century AD, is dedicated to Adinath, the first of the Jain Tirthankaras. The other important places in Chittorgarh are Rana Kumbha’s Palace, Kumbha Shyam Temple (associated with mystic poetess Meerabai), Kalika Mata Temple, Fateh Prakash Mahal and the Jaimal and Patta Palaces. The Bassi Wildlife Sanctuary, Sita Mata Sanctuary, Sanwarlyaji Temple, Matri Kundia Temple and Bijaipur Castle.

Chowmohalla Palace: Hyderabad, Telangana. Built in 1750 by Nizam Salabat Jung and designed along the lines of the Shah’s palace in Tehran, it consists of a group of palaces each used for a specific purpose. It consists of the Khilwat, Aftab Mahal, the Tahniyat Mahal and the Durbar Hall.

Chunar Fort: Uttar Pradesh. Chunar Fort has been a strategic point during the incessant struggles between the Pathans and the Mughals in the 16th century. Between 1529-1539, it changed hands many times between Humayun and Sher Shah Suri. The fort remained in his hands of Afghans until 1575 when Akbar won it. Later, it was ceded to the East India Company in exchange for the fort at Allahabad. 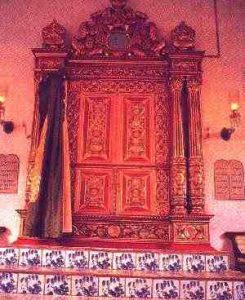 Cochin (Kochi): Kerala. Cochin, known as the ‘Queen of the Arabian Sea’, was an important trading port since time immemorial. It was also the site for the first European settlement in India. The influence of the Portuguese, Dutch and the British abound in the architecture and monuments of the city. Ernakulam is the modern part of Cochin and an important commercial centre. The important places of interest in Cochin are: (a) Synagogue of Mattancheri: Built in 1568 A.D., it was destroyed by the Portuguese in 1662 AD but was rebuilt in 1664 AD. The Great Scrolls of the Old Testament, the copper tablets on which the grants of priviledge made by the Cochin rulers are laid down and the hand-painted tiles are of great significance. The exquisite Belgium chandliers and the hand-painted Chinese tiles are of particular interest; (b) Mattancherry Palace (Dutch Palace): It was built by the Portuguese and presented to the Cochin Raja in 1555 AD. The Dutch carried out some repairs to the palace in 1663 A.D. (c) St. Francis Church: Built by the Portuguese in 1510 A.D., it is believed to be the first church built by the Europeans in India. The Portuguese traveller Vasco-da-Gama was buried here for 14 years, before his mortal remains were later shifted to Portugal; (d) Santa Cruz Cathedral (Basilica); (e) Chinese Fishing Nets; (f) Bolghatty Island (built by the Dutch in 1774) and (g) Willingdon Island.

Connaught Place (CP): New Delhi.  Designed by Robert Tor Russel, Connaught Place or CP served as the nucleus around which the city of New Delhi built, when it was decided on December 12, 1911 to shift the capital of India from Calcutta to New Delhi. The British Viceroy Lord Hardinge suggested that  a “Western architecture with an Oriental motif” be adopted when designing the CP.  Three Indian contractors played an important role in the building of CP: Sir Sobha Singh, Sardar Dharam Singh and Rai Bahadur Narain Singh.  The Regal Cinema in CP was built in 1928 followed by Rivoli in 1940 and Odeon in 1945.  In 1995, Connaught Place was renamed as Rajiv Chowk and Connaught Circus (the Outer Circle) was rechristened Indira Chowk.

Cranganore: Kerala. Cranganore (Kodungallore or Muziris) is a place near Cochin, where St. Thomas landed in 52 A.D. It was the capital of Cheraman Perumal, the King of Kerala. It is famous for the Cheramanparambu Palace, Portugese Fort and the Tiruvanchikulam and Bhagavathi temples.