​Dakshineshwar: West Bengal. It is famous for its Dakshineswar Temple (Kali Temple) built by Rani Rasmani of north Calcutta in the 19th century on the bank of Ganges, north east of Calcutta. It is here that Sri Ramakrishna Paramahamsadeva, the renowned spiritual personality and the guru of Swami Vivekananda, had worshipped Kali, the Divine Mother, and did his sadhana at the Panchavati Garden adjacent to the temple.

Dalhousie: Himachal Pradesh. It is the famous hill station of the British period. The town is named after the British Governor General, Lord Dalhousie who visited this area around the middle of the 19th century. Subash Baoli, Satdhara, Bakrota hills, Panjpulla, Kalatope, Bara Pathar ( famous for the temple of Bhulwani Matha) and Dhain Kund (a high peak) are important places in Dalhousie. 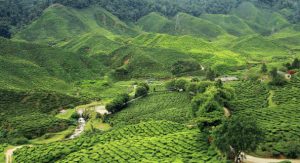 Daulatabad Fort: Maharashtra. It was built in 1187 A.D. by Villama Raja of the Yadava dynasty during whose time it was known as “Devagiri” or the ‘Hill of Gods’. It was plundered by Allauddin Khilji in 1294 A.D. and became the capital of Muhammad Tughlaq in 1327 A.D. The Chand Minar is a 65m high spectacular tower located at this fort built by Allauddin Bahamani in 1453 A.D. in commemoration of his conquest of Deccan.

Deoghar: Jharkhand.  It is an important Hindu pilgrim centre renowned for its Shiva Temple. 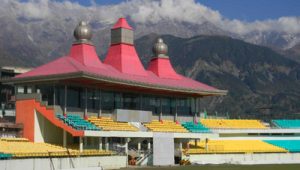 Dharamshala: Himachal Pradesh. The splendid town of Dharamshala is situated on the foothills of mighty Dhauladhar Mountains or “The white mountains”. After the Chinese invasion of Tibet in 1959, Dharamshala became the temporary headquarters of the Dalai Lama. It is often described as the ‘Little Lhasa in India’. Mcleodganj is a charming Tibetan settlement and is a major culture centre of Tibetan Buddhism in India. His Holiness Dalai Lama also resides in Mcleodganj. The Tibetan Institute of performing Arts (TIPA) is also located here.

Dholavira: Gujarat. Dholavira is an Indus valley site, assumed to be over 5000 years old, which was excavated in 1990. It is located half way between a range of low hills and the Rann of Kachchh.

Diu: It is a district of the Union Territory of Daman & Diu. It is famous for the Chakratirth, Ghoghla, Gomatimata, Jallandhar and Nagoa Beaches; St.Paul’s Church; St. Thomas Church; Diu Fort (constructed between 1535-1541 AD); Fortress of Panikota (Fortem du Mar); Navlakha Parshvanath Temple and Gangeshwar.

Elephanta: Maharashtra. Created by the Chalukyan rulers, the island of Elephanta is famous for its great cave shrine which is the glorious abode of Lord Shiva. It has among its beautiful stone sculptures, carvings of Shiva in his various avatars, as ‘Nataraj’ and ‘Gangadhar’. The three-headed ‘Maheshmurti’ is the most impressive of all the sculptures. The island, dating back to the sixth century A.D, was earlier known as Gharapuri, the Fortress City but was renamed as ‘Elephanta’ by the Portuguese. The Elephanta was accorded the title of World Heritage site in 1996. 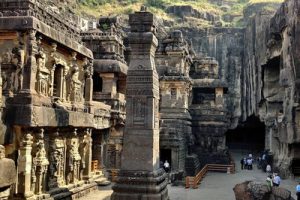 ​Ellora Caves: Aurangabad, Maharashtra. The Ellora caves, 34 in number, are the finest specimens of cave-temple architecture. These were carved during the period 350 AD to 700 A.D. The 12 caves to the south are Buddhist, the 17 in the centre dedicated to Hinduism, and the 5 to the north are Jain. Caves 6 and 10 house the Buddhist and Hindu images under the same roof, the latter dedicated to Vishwakarma, the patron saint of Indian craftsmen. The Vishvakarma cave is both a Chaitya and a Vihara, with a seated Buddha placed in the stupa. The Kailasa temple in Cave 16 is an architectural marvel, the entire structure having been carved out of a monolith, the process taking over a century to finish. It was built by the Rashtrakuta ruler Krishna II during 751-783 A.D. The Dumar Lena cave resembles the famous cave-temple at Elephanta and is dedicated to Lord Shiva. The Jain caves contain grand statues of Parasnath, images of Tirthankaras and one of them has a seated figure of Mahavira.

Ettaiyapuram: Tamil Nadu.  This is the birthplace of the great revolutionary poet Subramanya Bharathi who is regarded as one of the best Tamil poets of the modern era. 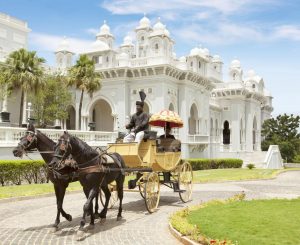 Falaknuma Palace: Hyderabad, Telangana. Built in 1870 by Nawab Vikar-Ul-Ulmara, the Prime Minister of Hyderabad at a cost of Rs 40 lakhs, it is a stupendous palace which has a library, a picture gallery, and a luxurious reception hall with cabinets containing diamond, crystal and emerald objects. The palace was constructed over a period of seven years and it covers a total area of 9,39,712 square meters. The Falaknuma palace is a rare blend of Italian and Tudor architecture. The Falaknuma also includes the largest Venetian chandeliers.

Faridabad: Haryana. It is believed that Faridabad was founded by Emperor Jahangir’s treasurer Shaikh Farid in 1607 A.D. The place is famous for the tomb of the Sufi saint Baba Farid, Badkhal lake and Suraj Kund, which provides the venue for the famous Crafts Mela.