Places of Cultural Importance (A)

Adyar: Chennai.  It is the location of the world centre of the Theosophical Society.

Ahobilam: Andhra Pradesh. This is the most popular center of Narasimha worship. It is also known as Navanarasimha Kshetra, being the only place where the nine forms of Lord Narasimha are worshipped. The temple is divided in two parts, the lower and the upper Ahobilam. The lord of the upper Ahobilam is Ahobaleshwar. The lower Ahobilam is the abode of the Prahlada Varada Narasimha, the aspect of the Lord Vishnu blessing Prahlada and is a masterpiece from the Vijayanagar art. 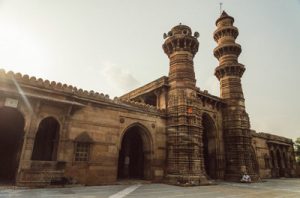 Aihole: Karnataka. Once the capital of the early Chalukyan dynasty (6th to 8th centuries), Aihole is famous for 125 temples built by the Chalukyas of Badami, which follow the Vesara style of architecture. Important temples include Lad Khan Temple, Durga Temple and the Meguti Temple.

Aizawl: Mizoram. The hilly city of Aizawl located at nearly 4,000 feet above sea level, is a religious and cultural centre of Mizoram. Champhai (a beautiful resort), Tamdil (a natural lake), Vantawng falls and Thenzawl (a hill station) are some of the attractions of Aizawl. Many Jewish names are commonly used in Aizawl. For instance, a road is named as ‘Zion Street’ while a traffic junction is names as ‘Israel Point’.

Ajanta Caves: Aurangabad, Maharashtra. Discovered in the 19th century, the Ajanta group of caves depicts the story of Buddhism, spanning the period from 200 BC to 650 AD. They have 24 monasteries and 5 temples. Cave 1 houses some of the most well preserved wall paintings which include the two great Boddhisattvas, Padmapani and Avalokiteshvara. 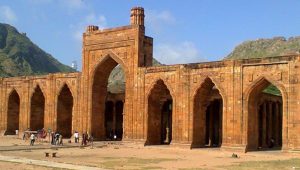 Ajmer: Rajasthan. The city of Ajmer was founded by Raja Ajai Pal Chauhan in the 7th Century AD. Ajmer is most renowned for the Darga of the Sufi Saint, Khwaja Moin-ud-din Chisthi, who came to Ajmer from Persia in 1192 AD and died here in 1236 AD. The construction of the shrine was completed by Humayum and a gate was added to the complex by the Nizam of Hyderabad. The Akbari Masjid and the Shahjahan’s Mosque are located in the complex. The Adhai-din-ka-Jhopra, located beyond the Darga, was constructed in 1153 AD and converted into a mosque in 1198 AD by Mohammed of Ghori. Taragarh Fort, India’s first hill fort built by Akbar, the Baradari, the “Magazine” where Jehangir received the representative of the East India Company, Mayo College (founded in 1875 AD), shrine of Swami Dayanand Saraswati and Foy Sagar are other important places around Ajmer.

Allahabad: Uttar Pradesh. Allahabad was known in ancient times as ‘Prayag’ famous for the Triveni Sangam i.e. confluence of rivers Ganga, Yamuna and the mythical Saraswati. Allahabad is also famous for the Allahabad Fort, which has in its precincts the Ashokan Pillar built in 233 BC and the Rani Mahal, built by Rani Jodha Bai. The other important buildings of Allahabad include the Anand Bhawan (the traditional home of the Nehrus, which was donated to the Indian National Congress by Motilal Nehru in 1931 and was renamed as the Swaraj Bhawan), Alop Devi Temple, Mankameshwar Temple, Kalyani Devi Temple, Khusro Bagh, St.Joseph’s Cathedral and Patalpuri Temple. It is the site for the annual Magh Mela and one of the sites for the Kumbh Mela, which takes place once in 12 years.

Allappuzha: Kerala. Often called the ‘Venice of the East’, Allappuzha is famous for the Sreekrishna Temple at Ambalapuzha; St.Andrew’s Church at Arthunkal; Krishnapuram Palace, the Chettikulangara Bhagavathy Temple and the Mannarsala, which is an important centre for serpent worship in Kerala.

Alleppey: Kerala. It is famous for its large network of canals and the long sandy beach. The snake-boat race is held here every year.

Almora: Uttaranchal. Capital of the Kumaon district, it was founded in 1560 by Balo Kalyan Chand. It is famous for the temples of Katarmal, Jageshwar, Gananath, Baijnath and Bageshwar.

Alwar: Rajasthan. As early as 1500 B.C., the erstwhile state of Alwar, formed part of the Matsya territories of Viratnagar, which also encompassed Bharatpur, Dholpur and Karauli. This Rajput state was formerly known as Mewat. The magnificent Alwar Fort has has remains of Jal Mahal, Nikumbh Mahal, Salim Sagar, Surij Kund and the Vinay Vilas Mahal. The picturesque garden of Purjan Vihar, Vijai Mandir Palace, Jai Samand Lake, Sariska Wildlife Sanctuary and the Sariska Palace are other important places around Alwar. 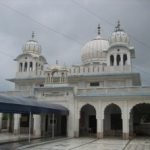 Ambala: Ambala is renowned for the three historical gurudwaras — Badshahi Bag Gurudwara, Sis Ganj Gurudwara and Manji Sahib Guru dwara — which are associated with Guru Govind Singh, Guru Tegh Bahadur and Guru Hargovind respectively. The other religious places in Ambala are the Bhawani Amba Temple, Saint Paul’s Church and the shrines of Lakhi Shah (associated with Tej-ud-Din Chisti) and Taqwal Shah. The magnificent Rang Mahal at Buria nearby was erected during Shah Jahan’s reign. 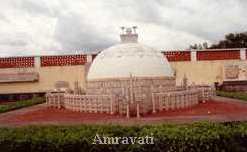 Amravati: Andhra Pradesh. Located 30 miles from Vijayawada on the right bank of the Krishna River, Amravati (or Amaresvaram) houses one of the best-known Buddhist relics. Also known as Dhanyakatakam and “Deepaladinne”, it was the capital of the later day Satavahanas and was considered as the most sacred Buddhist pilgrimage center in India. Amravati is most famous for the largest Stupa in the country, the Mahachaitya Stupa, built during the 2nd century BC. The Stupa was discovered in 1797 by the British archaeologist Colonel Colin Mackenzie. Amravati is also famous for the temple of Amareswara, which consists of a massive Lingam. The extensive mounds of Dharankota located on the west of Amravati, together with Nagarjunakonda and Amravati form the Golden Triangle of Buddhism in Andhra Pradesh. About five kilometers from Amravati lies the cave temple of Lord Venkateswara at Vaikuntapuram. Mangalgiri, located en route to Vijayawada, is famous for its ancient Panakaalaswamy temple.

Anand: Gujarat. Situated 35 Kms. from Vadodara, the Anand milk cooperative is one of the most successful examples of a cooperative venture in the country.

Araku Valley: Vizag, Andhra Pradesh. It is a beautiful with cascading water falls and is inhabited by 17 colourful tribes. The traditional folk dances like Dhimsa dance are still performed here.

Arekamedu: Pondicherry. It is about 20 km from Pondicherry town. Recent excavations at some sites in Arekamedu have unearthed Roman coins, wine jars and other artifacts, establishing it to be the earliest Indo-Roman trading centre (around 2nd century AD). Further evidence points to a Buddhist stronghold. 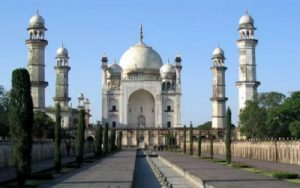 Aurangabad: Maharashtra. Malik Amber, the Prime Minister of Murtaza Nizam Shah II, founded Aurangabad in 1610 A.D. When Malik Amber’s son Fateh Khan, succeeded the throne in 1626 A.D., the city was renamed as ‘Fatehpur’. In 1653, when Aurangzeb became the Viceroy of the Deccan, he made it his capital and renamed it ‘Aurangabad’. Aurangabad is famous for the Bibi-ka-Maqbara, built by Aurangzeb between 1657-1661 A.D. as a tribute to Aurangzeb’s wife, Begum Rabia Durani. It was completed by Aurangzeb’s son Prince Ahmad Shah. The monument is a replica of the famous Taj Mahal. The adjoining Panchakki is an ancient water mill designed in 1595 A.D. by Malik Amber. Khuldabad, near Aurangabad is famous for Aurangzeb’s tomb and the darga of saint Khaja Zainuddin Shirazi. The 18th century Ghrishneshwar Temple, near Aurangabad, is regarded as one of the 12 jyotirlingas in the country. Aurangabad is also famous for the 12th century Daulatabad or Devagiri fort. However, the city derives its fame as a base for the nearby caves of Ajanta and Ellora. The typical arts and crafts of Aurangabad include Paithani saris, Himroo shawls and Bidri work (zinc with silver embedding).

Auroville: Pondicherry. Auroville or the City of Dawn was developed under the Mother’s direction in 1968 with the co-operation of many nations. Designed by the French architect Roger Arger, Auroville is envisioned as a place where people could live “freely as citizens of the world, obeying one single authority that of the Supreme Truth, a place of peace, concord, harmony”. There are about 40 odd settlements located around a central focus called the Matri Mandir. These settlements are engaged in a variety of activities, including afforestation, farming, education and handicrafts.