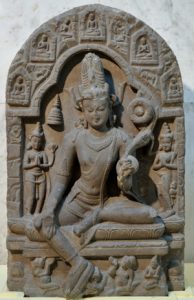 ​The Pala School of Art (8-13th centuries A.D.) flourished in Bengal and Bihar under the Pala and the Sena rulers, with Nalanda being its most important centre. The Pala Buddhist iconography it typified by doubly crossed legs with right hand touching the earth. The famous image at Bodhgaya called the “Lion of the Sakyas”, depicting ‘vajrasana’ posture and the ‘maravijaya’ hand gesture , along with the bronzes of Nalanda, are outstanding examples of the Pala School of Art.

The stupas of Bengal were generally small and built with stone, brick and bronze and were built by devotees for religious performances. The earliest specimen of stupas of this type is the Asrafpur stupa of Dhaka belonging to the period 7th century A.D., besides the bronze stupas of Paharpur (Rajshahi) and Jhewari (Chittagong). The Buddhist art of the Pala dynasty had considerable influence on the Nepalese art. It also spread to Myanmar, Thailand, Indonesia and other south-east Asian countries. 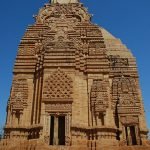 The Pratiharas had an extensive empire during the 8th and 9th centuries A.D. The temples developed under this rule have certain common features and unique designs and decorative schemes. The Pratihara temples of Malwa are characterised by a low short plinth, a simple and relatively stunted spire and a wall decorated with a single band of sculptured niches . The group of temples at Naresar, Gwalior have a square sanctum with a curvilinear ‘tri-ratha’ and constitute the earliest temples of this style of architecture. The ‘Teli-Ka-Mandir’ at Gwalior, the ‘Mahadeva Temple’ at Amrol, the ‘Kutakeshvara Temple’ at Pathari and the Jain temples at Deogarh are outstanding examples of the Pratihara style of temples.