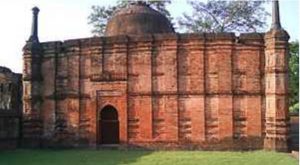 Under the Sharqi dynasty, Jaunpur became a great centre of art, culture and architectural activity. During the rule of Shamsuddin Ibrahim (1402-1436 A.D.) several palaces, mosques, tombs and other buildings came up, the most prominent being the ‘Atala Masjid’ built in 1378. Gujarat witnessed significant architectural activity for over 250 years. The early phase of the architecture belonging to the 14th century is represented by the ‘Baba Farid’s Tomb’ and the ‘Adina Masjid’ at Pathan, Jama Masjid of Bharuch (1300 A.D.) and the ‘Hilal Khan Qazi’s mosque’ in Dholka (1333 A.D.). Under the rule of Ahmed Shahi (early 15th century A.D.) and Mahmud I Begarha (1459-1511 A.D.) different types of mosques, tombs and gateways were built at Ahmedabad, Dholka and Sarkhej. Ahmedabad is a city full of architectural masterpieces which include ‘Sayyid Alam’s mosque’ (1412 A.D.), ‘Teen Darwaza’ (1415 A.D.), ‘Tomb of Ahmed Shah’ (1440 A.D.), ‘Rani-ka-Hujra’ (1440 A.D.), ‘Qutubuddin’s mosque’ (1454 A.D.), ‘Rani Sipri Mosque’ (1505 A.D.), ‘Sidi Bashir’s Mosque’ (1510 A.D.), which is famous for its “shaking minarets” and ‘Rani Rupmati Masjid’. 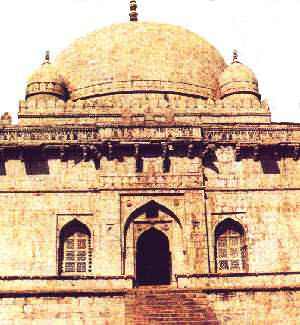 The cities of Dhar and Mandu of the Malwa province provide examples of distinct architectural elements in the form of polychromatic ornamentation of buildings, which was obtained by the use of coloured stones and marble as well as tiles. The earliest buildings of this period are the ‘Kamal Maula Masjid’ (1400 A.D.) and ‘Lat Masjid’ (1405 A.D.) at Dhar and the ‘Dilawar Khan Masjid’ (1405 A.D.) and ‘Malik Mughis mosque’ (1452 A.D.) at Mandu. The architectural activity took a new turn with the establishment of the capital at Mandu, especially under the rule of Hoshang Shah (1405-1435 A.D.). Important buildings in Mandu are the ‘Jahaz Mahal’ (a 120 meter long ‘ship palace’ built by Sultan Ghiyas-ud-din-Khilji), ‘Taveli Mahal’, ‘Hindola Mahal’, ‘Dilawar Khan’s Mosque’, ‘Hoshang Shah’s Tomb’, ‘Ashrafi Mahal’ and the Jami Masjid built by Mahmud Shah Khilji I. As Mandu or the ‘City of Joy’ was associated with the romance of the poet-prince Baz Bahadur and Rani Roopmati, many buildings are devoted to them like the ‘Baz Bahadur’s Palace’ and ‘Roopmati’s Pavilion’.

The Deccan architecture is marked by its distinct originality and independence of style, unlike the architectural styles of the other provinces which combined both the temple and Islamic architectural features. It derived its elements from the architectural styles of the Sultan of Delhi and that of the distant Persia. These aspects are best illustrated by the evolution of tombs in the Deccan. The earliest specimen afforded by the tomb of Allauddin (14th century) was an imitation in toto of the Tughlaq style of Delhi. The tombs of the 15th century built by the Bahmani rulers of Bidar depict distinct Persian elements dexterously combined with those of the Delhi style. Finally, the tombs of the Qutub Shahi dynasties of the 16th and 17th centuries show a fully developed bulbous or “Tartar” dome, indicating its complete evolution by the amalgamation of various differing styles. The earliest period of architectural development started in 1347 A.D. when Allauddin Bahman Shah constructed the Gulbarga Fort and the Jami Masjid at Gulbarga. The second phase is represented by the architecture of Bidar initiated by Ahmed Shah (1422-1436 A.D.), which includes the Bidar Fort, ‘Mahmud Gawan’s Madrasa’ and the ‘Ali Barid’s Tomb’. 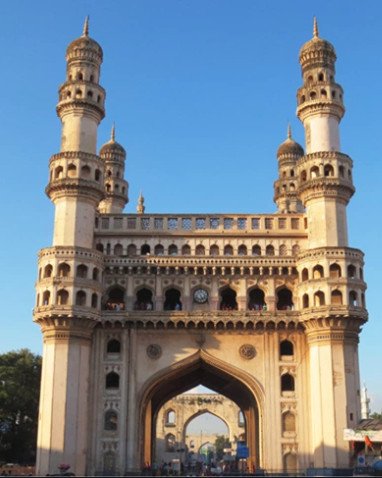 ​​The Qutub Shahi and Nizam Shahi dynasties contributed greatly towards the development of the Deccan style of architecture. The best architectural specimen is the Charminar built in 1591 A.D. by Mohammed Quli Qutub Shah. Often called “Arc de triumph of the East”, it is a beautiful structure with four intricately carved minarets built with granite and lime-mortar. The Mecca Masjid, located near the Charminar, is another architectural beauty. The Golconda Fort built by Mohammed Quli Qutub Shah in 1525 A.D. was an impregnable fort of great strategic importance to most of the rulers. The Qutub Shahi Tombs are a cluster of six magnificent tombs situated a kilometre north of Golconda Fort’s ‘Banjara Darwaza’. These are built in a unique architectural style which is a mixture of Persian, Pathan and Hindu forms. The tomb of Mohammed Quli Qutub Shah is one of the largest and most imposing of these monuments. The Chowmahalla Palace built in 1750 A.D. by Nizam Salabat Jung was designed along the lines of the Shah’s Palace in Tehran and consists of a group of palaces each used for a specific purpose. It consists of the ‘Khilwat’, ‘Aftab Mahal’, ‘Tahniyat Mahal’ and the ‘Durbar Hall’. The ‘Falaknuma Palace’ built in 1870 A.D. by Nawab Vikar-Ul-Umra is a rare blend of the Italian and Tudor architecture.

The Adil Shahi dynasty of Bijapur constructed several mosques, tombs and palaces. The development of dome reached its acme during their reign. They also borrowed some elements like the use of symbol of crescent from the Ottoman Empire. The most distinct monument of this period is, undoubtedly, the ‘Gol Gumbaz’ built by Mohammad Adil Shah, which is the largest masonry dome in the world. The dome is 51 metres high and has a diameter of 37 metres. The dome is an engineering marvel since it stands unsupported by any pillars. Bijapur is also famous for the ‘Sat Manzil’, ‘Ibrahim Roza’, ‘Bara Kaman’, ‘Nagar Khana’ and the ‘Gagan Mahal’.

The Islamic architecture of Kashmir is typified by use of woodwork. The log construction using Deodar trees for the construction of wooden bridges called ‘kadals’ or wooden shrines called ‘ziarats’ are the best illustrations of wooden architecture of Kashmir. The mosque of Shah Hamdan in Srinagar and the Jami Masjid at Srinagar built by Sikandar Butshikan (1400 A.D.) are typical examples of this type of architecture. The Mughals tried to revive the art of stone building in Kashmir in the 16th and 17th centuries. The ‘Fort of Hari Parbat’, the ‘Patthar Masjid’ (1623 A.D.) and the ‘Akhun Mulla Shah’s mosque’ (1649 A.D.) are illustrations of these efforts.

Sher Shah Suri also made noteworthy contribution to the Indo-Islamic architecture. The town of Sasaram in Bihar is an excellent illustration of the Suri monuments, which are in the form of four tombs viz., Sher Shah’s Tomb, the tomb of his father, Hasan Sur Khan, the tomb of his son Salim Shah and the tomb of Alwal Khan, the chief architect of Sher Shah. The tomb of Sher Shah Suri is an architectural masterpiece that had profound impact on the evolution of Indo-Islamic architecture. Sher Shah’s another great contribution was the completion of the sixth city of Delhi called the ‘Shergarh’ or ‘Dilli Sher Shahi’ around the Purana Qila area in 1540s. The ‘Qila-i-kuhna Masjid’ built by Sher Shah Suri in 1541 A.D. is one of the most fascinating buildings in the Purana Qila.