Puppetry is a popular form of entertainment theatre in different parts of India, which uses various forms, known as ‘puppets’, to illustrate the narratives. The origin of puppetry in India goes back to the ancient times. Excavations at several Harappan sites have revealed a number of toys whose body parts can be manipulated with strings. There are numerous references to different kinds of puppets in the Mahabharata and a Buddhist work called ‘Therigatha’. 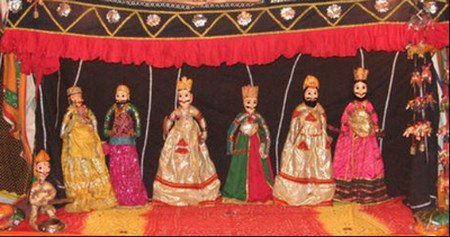 String puppets are found in Andhra Pradesh, Rajasthan, Odisha, Tamil Nadu and Karnataka. In this, the stress is more on the manipulative skill of the 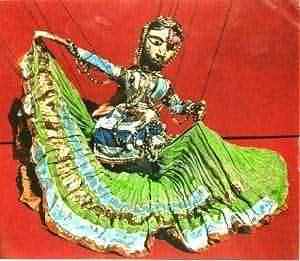 puppeteer. The ‘Kataputali’ shows of Rajasthan, ‘Putla Nach’ of Assam, ‘Malasutri Bhaulya’ of Maharashtra, ‘Bommalattam’ of Tamil Nadu and ‘Gombeyatta’ of Karnataka fall under this category. The ‘Putual Nach’ of West Bengal and the ‘Kathi Kundhei’ of Odisha are the best examples of rod puppetry in India.

During a puppetry performance in a village, a rectangular stage is set up by using split bamboo and woolen blankets (Kambli). The performance is commenced with an invocation to Lord Ganesha and Saraswati. In order to announce that the show is about to commence a pair of buffoons Silekyatha and his hilarious wife, Bangarakka makes an appearance on the screen. They attract the audience by observations, gestures, jokes and comments on village affairs. The core of the performance is enacted during which detailed and dramatically prolonged episodes from Ramayana, Mahabharata, stories from Puranas and the Devi scriptures are presented. The headman, his wife and children, gives the male, female, and children voices respectively. The music is provided by rubbing a reed on the back of a bell-metal dish, a mukha-veena or a harmonium. The themes depend on the occasions for which the Puppeteers are invited. They perform “Krishna Leela” on birthdays, “Girija Kalyana” on wedding days and “Swargarohana” when a death takes place.