The Rajputs were great patrons of art and architecture, who built fabulous palaces and forts. The Rajput palaces are complex compositions built as inner citadels surrounded by the city and enclosed by a fortified wall as at Chittorgarh and Jaisalmer. Some forts, such as those at Bharatpur and Deeg, were protected by wide moats.

The oldest surviving palaces date from the mid-fifteenth century and are found at Chittor and Gwalior. The ‘Man Mandir’, the largest palace in Gwalior, was built by Raja Man Singh Tomar (1486-1516). The ‘Man Mandir’ has two storeys above and two below the ground level overhanging a sandstone cliff. This gigantic cliff is punctuated by five massive round towers, crowned by domed cupolas and linked by delicately carved parapets. The palaces of Jaisalmer, Bikaner, Jodhpur, Udaipur and Kota represent the maturity of the Rajput style. All of these palaces were built predominantly in the 17th and early 18th centuries. The huge fortified city of Jaisalmer is situated far out in the Thar Desert. The buildings were constructed with the local yellow-brown stone and these have been remarkably preserved owing to their remote location.

The city of Bikaner is encircled by 5.63 km long stone wall in rich pink sandstone. The ‘Meherangarh Fort’ stands on a cliff with a sheer drop of over 36 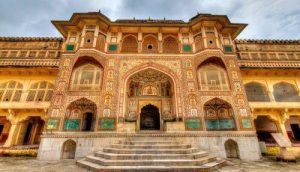 metres. The foundation of Jaipur, the fabled “pink city”, in 1727 A.D. represents the final phase of Rajput architecture. Built by Jai Singh, the city is enclosed by a wall and has bastions and towers at regular intervals. The City Palace is at the centre of the walled city and is a spectacular synthesis of the Rajput and Mughal architectural styles. The famous building ‘Hawa Mahal’ (1799) has a five-storeyed symmetrical facade composed of 953 small casements in a huge curve each with a projecting balcony and crowning arch. The ‘Jantar Mantar’, the largest of five observatories built by Jai Singh II in the early eighteenth century, is another interesting example of the Rajput architecture.