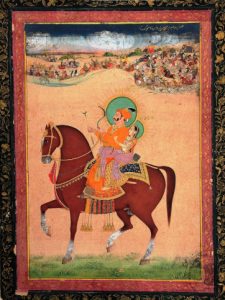 The Rajput paintings can be classified under two broad groups: the ‘Rajasthani style’ and the ‘Pahari style’. The Rajasthani paintings developed under the patronage of local Rajput rulers, spanning a large area of ‘Rajputana’, extending from Bikaner to the Gujarat border and from Jodhpur to Gwalior and Ujjain. The beginning of pure Rajasthani style has been fixed between the later half of the 15th century and the early part of the 16th century, probably around 1500 . These paintings were characterised by bold outlines and brilliant colours, depicting religious or romantic themes that were based on the episodes of Rama and Krishna. Court scenes and royal portraits were also depicted. The romance of ‘Padmavati’, penned by the poet Malik Muhammad Jaisi, provided another common theme to the Rajput paintings. Under Raj Singh (1652-1681), illustrations of Mahabharata, the Panchatantra, Chand Bardai’s ‘Prithviraj Raso’ and Bana Bhatta’s ‘Kadambari’ were painted. In Mewar, the ‘Geet Govinda’ and the ‘Sundar Sringara’ were executed in the first quarter of the 18th century. The Rajput painting developed distinct styles in Kishangarh, Jodhpur, Jaipur, Kota and Bundi.