Indian Theatre in the Post-Independence Period

In the middle of the 19th century the Western literature and feelings of nationalism and pride of the glorious past of the country influenced the Indian Theatre movement. Indian theatre and drama got a new footing, when Sangeet Natak Akademi was started in January 1953. Later, the National School of Drama under the directorship of Ebrahim Alkazi did much for the growth and promotion of modern theatre.

In the 1960s, by a suitable mixing of various styles and techniques from Sanskrit, medieval folk and western theatre, the modern Indian theatre was given a new, versatile and broader approach at every level of creativity. Among the pioneers of the dramatic revival in India, mention may be made of Ranchhodbhal and Nanalla Kavi in Gujarat, Verasalingam, Guruzada Appa Rao and Ballary Raghavachari in Telugu, Santakavi Varadachari and Kailasam in Kannada, Laxminath Bezharua in Assamese, Kerala Varma Thampuran and C.V.Raman Pillai in Malayalam, Ramshankar Rai and Kalicharan Patnaik in Oriya and P.Sambandha Mudaliar in Tamil. 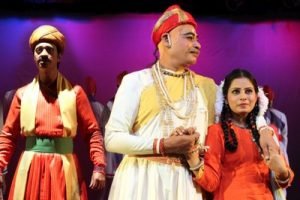 The year 1972 turned out to be a landmark for the Indian vernacular theatre when Vijay Tendulkar’s Marathi play ‘Ghashiram Kotwal’ made waves by its brilliant use of traditional folk forms in modern contemporary theatre. This led to the birth of a new breed of directors like B. V. Karanth, Habib Tanvir, Bansi Kaul and Rattan Thiyyam. Feroz Khan is another accomplished playwright who has to his credit several outstanding plays like ‘Tumhari Amrita’, ‘Mahatma vs. Gandhi’ and ‘Salesman Ramlal’. The last play is a Hindi adaptation of Arthur Miller’s ‘Death of a Salesman’.

In the recent years the country has produced talented playwrights who have chosen English as their medium. Manjula Padmanabhan was the first Indian to earn international acclaim with her play ‘Bitter Harvest’, a futuristic play that deals with the exploitation of human body in the 21st century. Another talented Indian English dramatist is Mahesh Dattani (b.1958) whose plays deal with contemporary social issues. He has written noteworthy plays like ‘Where There’s A Will’, ‘Dance Like a Man’, ‘Bravely Fought the Queen’, ‘Final Solutions’, ‘Tara’ and ‘30 days in September’.

Theatre continues to attract a new bread of young and talented actors, directors and playwrights. Anahita Uberoi, who is the daughter of the legendary Marathi theatre artiste Vijaya Mehta, is a talented theatre personality who has acted in several noteworthy plays like ‘Glass Menagerie’, ‘Seascape with Sharks’, ‘Dancer’ and ‘Going Solo’. Sanjana Kapoor, daughter of Shashi Kapoor, is another such artiste who manages the Prithvi Theatre and provides a platform to several newcomers. Her children’s play ‘The Boy Who Stopped Smiling’ has completed over hundred shows throughout India. Chetan Datar is a young and acclaimed playwright and director of Marathi theatre. His ‘Gandhi-Ambedkar’ ran for more than eighty shows.

Rajat Kapoor, who is associated with ‘Chingari’, a leading theatre group of Delhi, has translated into Hindi ‘Waiting for Godot’, ‘The Taming of the Shrew’ and Jean Genet’s ‘The Maids and Deathwatch’. He has also produced a highly dramatized play C for Clown. Tara Deshpande has acted in ‘Once upon a Fleeting Bird’, which is an English adaptation of Vijay Tendulkar’s ‘Ashi Pakhare Yeti’. Rael Padamsee, daughter of Alyque and Pearl Padamsee, has a fancy for producing plays targeted at young kids. Her important plays in this category include ‘Alladin and his Magic Lamp’, ‘Alibaba and the Forty Thieves’ and ‘Babloo the Bear’. She also choreographed plays with serious themes like ‘Betrayal’, ‘Games People Play’, ‘Acts of Faith’ and ‘Extremities’.

​Royston Abel is another accomplished theatre personality and founder of the Indian Shakespeare Company. His initial theatre productions include ‘Merchant of Venice’ (1993), ‘Macbeth’ (1996), ‘Mahanirvan’ (1997) and others. He later started working with street performers like Magicians, Jugglers, Snake charmers, Musicians and Puppeteers. Royston Abel bagged the first prize at the Edinburgh Fringe Festival for his role in the play ‘Othello – a play in Black & White’ (1999). His other noteworthy plays include ‘Romeo and Juliet in Technicolor’ (2000), ‘Goodbye Desdemona’ (2001), ‘Ladki Seedhi Rahegi’ (2005), ‘The Manganiyar Seduction’ (2006) and ‘A Hundred Charmers’ (2006) among others.

People often talk about the marginalisation of theatre by the film world. The exodus from theatre to films is not a new phenomenon, but of late, television, video, film and the satellite channels have diverted the maximum number of people away from the theatre to these options because of more money, glamour and market opportunities. As a result, theatre activities have suffered a severe setback in the last two decades or so. Although cinema had given an elbow jerk to the popularity of theatre, several film personalities themselves contributed for the growth and promotion of theatre. They include Arvind Deshpande, Vijaya Mehta, Jabbar Patel, Satyadev Dube, Dr Shriram Lagoo, Girish Karnad, Pearl Padamsee, Amol Palekar, Shashi Kapoor, Satish Kaushik, Farooq Shaikh, Naseeruddin Shah, Jaya Bacchan (‘Dr. Mukta’, ‘Ma Retire Hoti Hai’) and Shabana Azmi (‘Tumhari Amrita’, ‘Waiting Room’).

One pertinent question relates to the identity of Indian theatre today. India being a vast country with twenty two scheduled languages and many different cultures, the theatre cannot be identified with one uniform element. In India, the concept of National Theatre has to be seen purely in regional terms. In the post-Independence period conscious efforts were made to evolve the concept of a ‘National Theatre’ by breaking the barriers of language and region. Gradually many writers produced several good works at the national level. Badal Sarkar, Girish Karnad, Vijay Tendulkar, Mohan Rakesh, Adya Rangachari and Dharamveer Bharati are among them.

Today, it is not uncommon to find leading companies and organisations supporting efforts like holding a theatre festival or carnival of plays. The Prithvi Theatre started the annual theatre festivals called the ‘Prithvi festivals’ since 1983. It also organised the “Bol Jamoore” or the national festival of ‘Street Theatre’ in association with organisations like Child Relief and You (CRY). ‘Nandikar’, Rudra Sengupta’s well-known Kolkata group, has also been putting up National Theatre festivals since 1984.

The All India Radio was also instrumental in popularising drama for a long time through its national and regional broadcasts. The Television also provided the much-needed succour to the theatre artistes by way of Tele-serials and Mega-serials and Soap Operas. The mega-serials like ‘Buniyaad’ and ‘Hum Log’ and epics and historicals like ‘Mahabharata’, ‘Ramayana’ and ‘Tipu Sultan’ are among the all-time popular serials of the television.