This was the second phase of the evolution of theatre in India, which was based on oral traditions. This form of theatre was being performed from about 1000 A.D. onwards up to 1700 A.D. and continued further until today in almost every part of India. Emergence of this kind of theatre is linked with the change of political set up in India as well as the coming into existence of different regional languages in all parts of the country. The classical theatre was based on Natya Shastra was much more sophisticated in its form and nature and totally urban-oriented. On the contrary, the traditional theatre evolved out of rural roots and was more simple, immediate and closer to the rural milieu.

Historically speaking, it was during the 15-16 century that the folk theatre emerged forcefully in different regions. It used different languages, the languages of the regions in which it emerged. Initially these were purely devotional in tenor and typically revolved around religion, local legends and mythology. Later, with changing times it became more secular in content and began to focus on folk stories of romance and valour and biographical accounts of local heroes.

Indian folk theatre can be broadly divided into two broad categories — religious and secular — giving rise to the Ritual Theatre and Theatre of Entertainment respectively. The two forms thrived together, mutually influencing each other. Although they are considered as Folk theatre traditions, some of them have all the attributes of a classical theatre.   Most often the folk and traditional forms are mainly narrative or vocal, i.e. singing and recitation-based like Ramlila, Rasleela, Bhand Nautanki and Wang, without any complicated gestures or movements and elements of dance. India is also rich in ballad-singing traditions such as Pabuji-ki-phar of Rajastan and Nupipaalaa of Manipur.

While most of these theatrical styles have their own unique form dependent on their local customs, they differ from one another in execution, staging, costume, make-up and acting style, although there are some broad similarities. The south Indian forms emphasise on dance forms like Kathakali and Krishnattam of Kerala and actually qualify as dance dramas, while the north Indian forms emphasise on songs, like the Khyal of Rajasthan, the Maach of Madhya Pradesh, the Nautanki of Uttar Pradesh and the Swang of Punjab. The Jatra of Bengal, Tamasha of Maharashtra and the Bhavai of Gujarat stress on dialogues in their execution, the latter two emphasise on comedy and satire. Puppet theatre also flourished at many places in India. Shadow (Gombeyatta of Karnataka, Ravana Chhaya of Orissa), Glove (Gopalila of Orissa, Pavai Koothu of Tamil Nadu), Doll (Bommalattam of Tamil Nadu and the Mysore State and Putul Nautch of Bengal) and string puppets (Kathputli of Rajasthan and Sakhi Kundhei of Orissa) are some of the popular forms in vogue.

Dramatic art can also be found in some of the solo forms of Indian classical dance, like Bharat Natyam, Kathak, Odissi and Mohiniattam, and folk dances like the Gambhira and Purulia Chhau of Bengal, Seraikella Chhau of Bihar and Mayurbhanj Chhau of Orissa. Dramatic content is even woven into the ritual ceremonies in some areas, particularly those of Kerala, with its Mudiyettu and Teyyam.

​Ankia Nat is the traditional operatic one-act drama of Assam which owes its origin to the renowned Vaishnavite Sankardeva and his disciple Mahadeva, who developed it in the 16th century A.D. to appeal to the illiterate masses of Assam and the tribal population of Bengal and Bihar. These plays depict the episodes from the Krishna legend. At the beginning of the concert the ‘Sutradhar’ initiates the proceedings by singing and dancing. Thereafter, the singer-musicians on the stage, referred as the ‘Gayan-Bayan Mandali’, start playing the drums called ‘khol’ along with the big and small cymbals. The performance (‘Bhaona’) starts with a benediction in Sanskrit and eulogy to God in ‘Braj bhasha’. The instruments are played in various movements in two paces called ‘Saru Dhemali’ and ‘Bar Dhemali’. The various characters adorn themselves with masks to give special facial expressions. 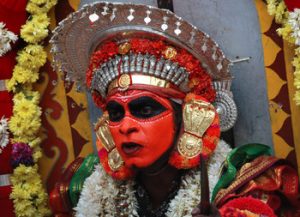 ​The cult of ‘Bhuta’ (meaning ‘spirit’) worship has been practised since time immemorial. It has evolved itself from the primitive ancestor-worship of deified animals and of natural forces. It is commonly practised in the South Kannara district of Karnataka and can be considered as a counterpart of the ‘Theyyam’ of north Kerala.

Kala is an early folk theatre form based on the Krishna legend. Kala has different branches like ‘Dashavatar Kala’, ‘Gopal Kala’ and ‘Gaulan Kala’.

Ramlila or the life history of Rama is performed during festivals like Dussehra in different parts of the country. In it, the entire ‘Ramayana’ is enacted by means of dialogues, songs and folk dances. Ramlila is an all-male performance in which even the role of Sita is enacted by a boy. Ramlila is particularly popular in Mysore.

Raslila is a dance-drama that evolved around the 15th-16th century A.D. Its themes are centred on the Krishna legend.