The Sahitya Akademi grants three types of fellowships: Sahitya Akademi Honorary Fellowship, Anand Fellowship and Premchand Fellowship. The ‘Sahitya Akademi Honorary Fellowship’ is the highest honour conferred by the Akademi on a writer and is reserved for ‘the immortals of literature’ and limited to 21 only at any given time. The ‘Anand Fellowship’ was instituted in 1996 in memory of the great scholar Dr. Ananda Coomaraswamy and is offered to scholars from Asian countries to pursue literary projects of their choice. The ‘Premchand Fellowship’ was instituted during the 125th Birth Anniversary of Munshi Premchand in 2005 and is given to scholars doing research on Indian literature or to creative writers from the countries of the SAARC region other than India.

The first Sahitya Akademi Fellowship was given in 1968 to Dr S.Radhakrishnan (1888–1975), a philosopher and former President of India.

The Sahitya Akademi Awards are the most prestigious literary awards of India conferred by the Sahitya Akademi – India’s National Academy of Letters, to commemorate the exemplary works of literary merit published in any of the major Indian languages i.e. 24 languages of which 22 are listed in the Eighth Schedule of the Indian Constitution, along with English and Rajasthani.

The Sahitya Akademi Award carries an engraved copper plaque, shawl and a cash prize of Rs 1 lakh (from 2009). The plaque awarded by the Sahitya Akademi was designed by the renowned film-maker Satyajit Ray. The awardees are decided by a three-member jury in all the respective languages. The awards are given during the ‘Festival of Letters’ organised by the Akademi.

Makhanlal Chaturvedi was the first hindi writer who won it in 1955 for his work “Him Tarangini” (Poetry).

Sahitya Akademi Awards 2019: The complete list of winners in a different language and genre categories is given in the table below. 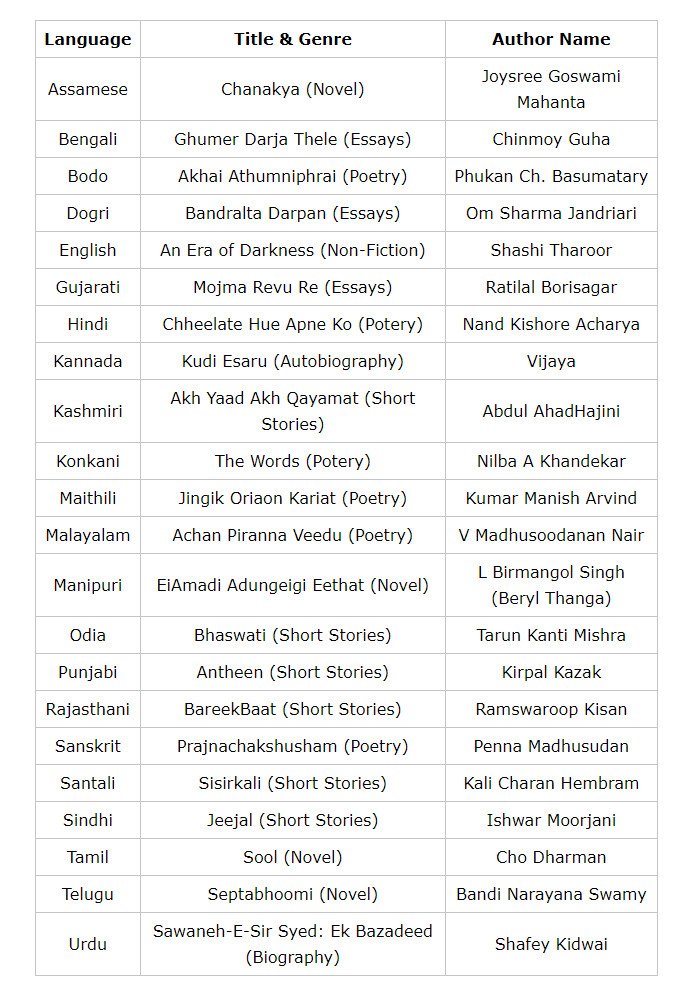 The Bhasha Samman was instituted by the Sahitya Akademi in 1996 and is given to writers, scholars, editors, collectors, performers or translators who have made significant contribution to the propagation, modernization and enrichment of the 24 languages recognized by the Akademi. In addition, it is also given to scholars who have done valuable work in the field of classical and medieval literature. The Samman carries a cash prize of Rs 1 lakh and a plaque and citation.

The awardees are selected by a Jury comprising of three members constituted by the President from a panel of names recommended by the Language Development Board/Members of the Akademi.

The first Bhasha Sammans were awarded in to Dharikshan Mishra for Bhojpuri, Bansi Ram Sharma and M.R. Thakur for Pahari (Himachali), K. Jathappa Rai and Mandara Keshava Bhat for Tulu and Chandra Kanta Mura Singh for Kokborok; for their contribution to the development of their respective languages.

Bala Sahitya Puraskar: This award has been instituted by the Sahitya Akademi of India for authors of Children’s books. The awardees are selected by a preliminary panel consisting of ten Referees who are nominated by the President of the Akademi on the recommendations of the Language Advisory Board. Thereafter, a three-member Jury decides the final winners. The Award is in the form of a casket containing an engraved copper-plaque and carries a cheque of Rs.50,000/-.

Yuva Sahitya Puraskar is instituted by the Sahitya Akademi for debutant writers in Indian languages under the age of thirty five as on 1st January of the year of the award. The awardees are selected by a three-member Jury decides the final winners. The Award is in the form of a casket containing an engraved copper-plaque and carries a cheque of Rs.50,000/-.

The 2019 Yuva Sahitya Puraskar were given to eleven books of poetry, six of short story, five of novel and one literary criticism. The list of awardees are as follows: