The precise origin of the Sanskrit drama is difficult to be determined. Rudiments of the earliest known plays could be traced to the 1st century A.D., but many scholars consider the theatre tradition in India to be much older. Archaeological excavations do not point to any signs of theatrical activity during the Harappan Civilization, which appears to have concentrated on dance and music. The ancient Vedic texts (1500-1000 B.C.) also do not throw much light on drama and there are only a few texts which appear to be composed in short, elementary dialogue.

Bharata’s ‘Natya Shastra’ (2nd century B.C. to 2nd century A.D.), is perhaps the earliest detailed treatise and handbook on dramatic art that describes almost all aspects of the classical Sanskrit Theatre. Later a number of works on drama and theatre were written in Sanskrit by Abhinava Gupta, Dhananjaya, Sagaranandi, Sharada Tanaya, Nandikeshwara and others. 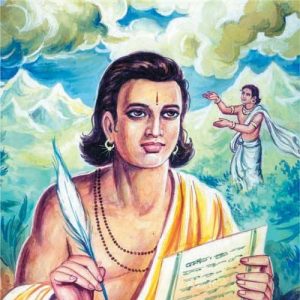 The ancient Indian philosopher-poet, Asvaghosa, is considered as the first Sanskrit dramatic author who composed ‘Sariputraprakarana’ in nine acts. Bhasa had composed thirteen alluring plays, which are ascribed to 4-5th century B.C. These are ‘Dutavakyam’, ‘Karnabharam’, ‘Dutaghatotkacha’, ‘Urubhangam’, ‘Pancharatram’, ‘Balacharitam’, ‘MadhyamaVyayoga’, ‘Abdhishekanatakam’, ‘Pratimanatakam’, ‘Pratijnayaugandharayanam’, ‘Swapnavasavadattam’, ‘Avimarakam’ and ‘Charudattam’. Sudraka was another renowned playwright of the time, who is best remembered for his play ‘Mricchakatika’. Unlike his predecessors, Sudraka introduced the element of conflict in his plays. Besides a hero (the Brahmin Charudatta) and a heroine (the courtesan Vasantasena), there was also a villain, which was uncommon in Sanskrit drama. Kalidasa is the most widely known of all the Sanskrit dramatists. He has left behind three dramas: ‘Malavikagnimitra’, ‘Vikramorvashi’ and ‘Shakuntalam’. Kalidasa’s dramas also portray an element of conflict i.e. the perennial human conflict between duty (‘dharma’) and desire (‘kama’). His dramatic expositions are rooted in an ancient Indian thinking of reconciling life’s multiple possibilities . Bhavabhuti produced ‘Uttaramacharitra’ (~700 A.D.) and ‘Mahavira-charita’, which are considered as one of the best dramatic plays of this period. The other outstanding plays in Sanskrit include Visakhadatta’s ‘Mudrarakshasa’ and Harsha’s ‘Ratnavali’.

Traditionally ten types of Sanskrit plays are identified – ‘Anka’, ‘Bhana’, ‘Dima’, ‘Ithamgra’, ‘Nataka’, ‘Prahasana’, ‘Prakarna’, ‘Samvakara’, ‘Vithi’ and ‘Vyayoga’. The ‘Natya Shastra’ focuses on only two of these types – the ‘Nataka’ and ‘Prakarna’. Plays falling into the category of the ‘Nataka’ include ‘Swapanavasavadatta’, ‘Uttaramacharitra’ and ‘Shakuntalam’. Love and heroism are the dominant sentiments of these plays, which range between five and seven acts. Plays falling into the category of ‘Prakarna’ narrate stories that were invented by their authors in which the story revolves around a hero and a heroine, with love being the predominant sentiment. ‘Anka’ or Act is made up of a series of incidents that are related to the major character.

The Sanskrit plays were circumscribed by certain rigid conventions. These plays always have a happy ending and tragedies and controversies are rarely depicted (although Bhasa had portrayed a death scene on stage in one of his plays). The central character of the play is a hero who strives for and ultimately realises the object of his desire. The Sanskrit plays had a definite opening, progression, development, pause and conclusion. Unlike the neo-classical plays of France and Germany, both time and place were flexible. However, even within these limitations most playwrights found enough space for portraying their individual creative expressions.

Sanskrit plays used to commence with more than a dozen elaborate pre-play rituals called ‘purva-ranga’, comprising of music and dance, most of which were performed behind the curtain. First the ‘Sutradhara’ (the director, the chief actor and the stage manager), clad in immaculate white, enters with his two assistants and offers worship to the presiding deity of the theatre. He then summons the leading actress and opens the play with a prologue which announces the time and place of the play and introduces the playwright.

The theatre halls were constructed and decorated strictly as per the traditional rules of architecture and acoustics. According to Bharata, a theatre of medium size could accommodate four hundred spectators. The stages occasionally had two storeys – the upper one for representing actions in the celestial sphere and the lower (ground) one for that in the terrestrial sphere. The subtle interplay of emotions was conveyed through facial expressions, gestures and speech but masks were not used. The impact of the play was heightened by an adroit use of the curtain. The dramas dealt with a wide range of themes and their treatment also varied greatly. Skits, comedies and intense melodramas were all written and presented. The absence of scenic effects was made up by a versatile histrionic technique.

Religion played an important role in drama as certain rituals accompanied most plays, and even the stage was consecrated before a performance. Thus, the Sanskrit drama could be called an amalgamation of the religious, educational and entertaining elements.

Various reasons could be cited for the decline of Sanskrit drama. When Sanskrit dramatists began exploring the poetic aspects of their work, the lyrics started gaining the upper hand over dramatic aspects of the text. The stringent rules of the ‘Natya Shastra’ may also have been responsible for the decline. Finding it creatively restrictive, writers may have turned to other forms. Another reason, though not the main, could be that Sanskrit, being the language of the priests and the elite, was not fully comprehended by the masses, which preferred something in a simpler language that they could understand. Finally, the importance of theatre definitely dwindled with the passing of the early Hindu kingdoms into the hands of Muslim rulers, who gave greater patronage to music and dance than to other forms of art like drama and theatre. However, after the 10th century, Sanskrit theatre continued to thrive in South India, where it survives even today in the form of ‘Koothiyattam’ in Kerala.