Schools or Sects of Tibetan Buddhism

The Nyingma (‘The Ancient Ones’), also known as the Red Hats, is the oldest school of Tibetan Buddhism, being foundedin C 820. It is based on a lineage of teachings and traditions introduced during the reigns of the Buddhist Kings of the Yarlong Dynasty in the 8th and 9th century by Padmasambhava (Guru Rimpoche),Shantarakshita, Vilalamitra and others. Guru Rimpoche built Samyey monastery to serve as a principal centre of learning for thissect. He gave widespread teachings from the highest classes of tantrato his twenty-five principal disciples. However, he did notdisclose hundreds of Treasures, which were in the forms of scriptures, images and ritual articles, with instructions fortheir revelation for the benefit of future generations.Subsequently, more than one hundred masters have revealed theseTreasures and taught them to their disciples.

The principal monastic institutions of this sect in India are Thekchok Namdrol Shedrub Dargye Ling in Bylakuppe, Karnataka; Ngedon Gatsal Ling in Clementown, Dehradun; PalyulChokhor Ling and E-Vam Gyurmed Ling in Bir, and Nechung Drayang Ling at Dharamsala, and Thubten E-vam Dorjey Drag at Shimla in Himachal Pradesh. Bylakuppeserves as the headquarters for this sect, which altogether has 55 monasteries. The present head of Nyingma Sect is Penor Rimpoche,who was appointed by the Dalai Lama.

The lineages of the Kagyu (‘Oral Lineage’) school of Tibetan Buddhismderive primarily from two sources: Marpa Chokyi Lodoe (1012-1099)and Khyungpo Nyaljor (978-1079). The main feature of this schoolis that the teacher, after having mastered the teachings, clearsaway defects – relating to intellectual understanding, meditationand the various levels of realization. Upon completion of theprocess, the teacher is able to point out and introduce mahamudrato the disciple. The Kagyu teachings have been transmitted andpreserved this way, in an unbroken line, until the present time.

The Phagdu Kagyu sect gaverise to eight sub-schools of which only three survive today. The Drikung Kagyu, founded by Drikung Kyopa Jigten Gonpo (1143-1217 AD) is presently headed by the 37th Successor, Drikung Kyabgon Che-Tsang(b. 1946), who resides at his monastery in Ladakh. The Taglung Kagyu founded by Taglung Thangpa Tashe Pel (1142-1210 AD), is presently headed by Shabdrung Rinpochey, who now lives in Sikkim.The Drukpa Kagyufounded by Choje Gyare Yeshe Dorjey or Ling Repa (1128-1189 AD),is headed by the 12th Drukchen Rinpochey who has his monastery in Darjeeling. 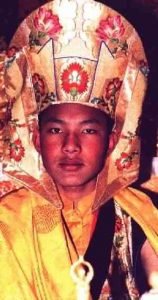 The Karma Kagyu traditionhas remained strong and successful as a result of an unbroken lineof reincarnations of the founder, the successive Karmapas.Famous among them were the Second Karmapa, Pakshi (1206-1282 AD),the third Karmapa, Ranjung Dorjey (1284-1339 AD) and the Eighth,Karmapa Mikyo Dorjey (1507-1554 AD). The main monastery of thistradition was Tsurphu, located in Central Tibet. In 1959, the 16thKarmapa Ranjung Rigpe Dorjey (1924-81) fled from Tibet to Sikkimand established the Rumtek monastery in 1966.The order known as the Black Hats soon grew into one of the richest and most powerful Tibetan spiritual centres.

After the 16th Karmapa’s death in 1981 (who died without giving an indication about his incarnation), four high lamas who were Karmapa’s disciples — Shamar Rimpoche, Gyaltsab Rimpoche, Tai Situ Rimpoche and Jamgon Kongtrul Rimpoche — started acting as the regents. The search for the Karmapa’s successor became controversial with claims and counter claims. In 1990, Tai Situ claimed that he discovered a letter written by the 16th Karmapa inside an amulet given to him by the master. Using this letter, a search party from Tsurphu located the new Karmapa Ugyen Trinley Dorje and on June 30, 1992, he was recognised as the 17th Karmapa by the Dalai Lama as well as by the Chinese Government. Ugyen Trinley Dorje fled from China to India on January 5, 2000 and joined the Dalai Lama in Dharamshala. In April 1994 a dissenting Rumtek regent, Shamar Rimpoche, tried to install an 11-year-old Tibetan boy based in Kalimpong, Thinley Thai Dorje (Tenzin Chentze) as Karmapa at a ceremony in Delhi. This rival claimant now lives in the Karmapa International Buddhist Institute in Delhi. In 1998, the fourth Rumtek regent unsuccessfully staked the claim of Dawa Sangpo Dorje from Mangan in north Sikkim as the real Karmapa.

The Sakya (‘Grey Earth’) sect originated in the 11th century (C 1035 AD) and has been closely associated with the Khon Family. Khon Lui Wangpo Sungwa became a disciple of Guru Rimpoche in the 8th century. Through the next thirteen generations, the dharma continued to be propagated through the Khon family. In 1073 AD, the Sakya Monastery was built by Khon Konchok Gyalpo, which established the Sakya Tradition in Tibet. Over a period of time, the main Sakya tradition gave rise to two other traditions called the Ngor lineage and the Tsar lineage, which together constitute the three schools (Sa-Ngor-Tsar-gsum) of the Sakya tradition. Presently, the headquarters of the Sakya sect are at Rajpur in Uttar Pradesh. The Sakya sect has 20 monasteries, with the major ones outside Tibet being Tsechen Tenpai Gatsal in Rajpur, Uttar Pradesh; Ngor E-Vam Shadrup Dargye Ling in Bir, Himachal Pradesh; Tsechen Dhongag Choeling in Mundgod, Karnataka and Ngor E-Vam Chodhen in Dehradun, Uttar Pradesh in India; Tashi Rabten Ling at Lumbini in Nepal and Phuntsok Phodrang in Seattle, USA. The Sect is currently headed by Ngawang Kunga Theckchen Rimpoche.

The Gelug (‘Way of Virtue’) sect combines the teachings and practices of the Nyingma, Kagyu and Sakya with the Sutra and Tantra systems of Indian Buddhism and the intellectual heritage of Nagarjuna and Asanga. The Gelug tradition was founded by Je Tsongkhapa (1357-1419 AD) in c.1385 AD. It is considered as the most dominant and reformed of all the Tibetan Buddhist Sects. The present Dalai Lama belongs to this sect. The headquarters of this Sect are at Dharamshala in Himachal Pradesh.

A school of Tibetan Buddhism founded by the 11th century Indian scholar and saint Atisha and his Tibetan disciple Dromtonpa. This school is particularly known for its great emphasis on practical application of the ideals of a Bodhisattva within the practitioner’s daily life and is responsible for the development in Tibet of a specific collection of writings known as Lojong or “Thought Transformation”.

A non-sectarian or eclectic movement which crystallized during the 19th century in Eastern Tibet by the integration of all schools of Tibetan Buddhism as a result of the efforts of the leading figures like Jamyang Khyentse Wangpo, Jamgon Kongtrul Lodro Thaye, Chogyur Dechen Lingpa and Ju Mipham Gyatso.

The sect called the ‘White Hats’ practices Tibet’s traditional religion, considered by scholars to be of Zoroastrian or Kashmiri Buddhist origin, which was widespread in Tibet, particularly in the western region of Zhangzhung, prior to the official introduction and establishment of Buddhism.