As far as the origin of sculpture is concerned, it goes back to the Stone Age. The Megalithic people buried their dead and constructed monumental stones over them and worshipped them. Tiny terra-cotta seals discovered from the Indus Valley reveal carvings of ‘peepal’ leaves, deities and animals. The famous figurine of the dancing girl of Mohenjodaro bears witness to the fact that the tradition of sculpture and bronze casting goes back to the Indus Valley Civilisation and shows tremendous sophistication and artistry. 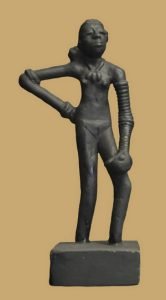 The sculpture in India started appearing from 3rd century B.C. with the stone pillars of Ashoka, the stupas and ‘toranas’ of Sanchi, Bharhut, Amravati and the rock-cut ‘viharas’ of Barabar, Bhaja, Pitalkhoda, Karle, Bedsa and Ajanta and continued till the 12th century A.D. During the reign of the Mauryan emperor Ashoka, nearly 85,000 stupas were constructed. Many awe-inspiring statues exhibiting a serene Buddha, with a glowing face were crafted in large numbers. Though, Buddhism deplored idol worship, human forms of Buddha began to be depicted with features like a halo around the head, the ‘dharmachakra’ engraved upon his palms and soles of his feet, and the lion throne representing his royal ancestry.

The earliest archaeological evidence of sculpture work in metal, terracotta, wood and stone in the Indian sub-continent is provided by the remains found at the pre-Harappan sites of Baluchistan, the Makran areas of Pakistan and Kalibangan in Rajasthan, dating back to 3000 B.C. Literary evidence from the Rigveda states that copper and bronze-smithy was a specialized science and that craftsmen were held in high esteem. Whether it is in wood, stone or ivory, the Indian carver-craftsman has been extremely versatile in applying his techniques and designs to various media. Carved wooden facades and fixtures of dwellings, domestic shrines, temples, churches and palaces of Rajasthan, Gujarat, Kashmir and Kulu in Himachal Pradesh are marked by intricate designs. In Punjab and Haryana, there exists a tradition of clay wall relief in appliqué. India is also famous for producing a startling range of terracotta figures, ritual and secular utility objects and toys for children.

The Pallava and Chola dynasties witnessed the flowering of the bronze casting technique that was extant from the Harappan period. The Chola bronzes (850-1275 A.D.) are unparalleled in their depiction of facile expression, suppleness of the human form and its flowing movements. The famous images of Nataraja, Parvati, Kodanda Rama and Navaneeta Krishna have perennially delighted devotees and aroused their religious fervour.

The distinctive Chola style emerged during the reign of Aditya Chola (870-906 A.D.). The bronzes of this period are characterised by display of supple body with flowing contours and an oval face. The world-renowned bronze images of Nataraja appeared for the first time during the reign of Parantaka I, Aditya Chola’s son. The Chola bronzes after 975 A.D. are divided into two separate groups: the Sembiyan Mahadev School and Raja Raja School, having their own characteristics but both developing simultaneously. The bronzes of the Sembiyan School are slender and tall and the figures are adorned by intricate ornamentation. The ‘Konerirjapuram Temple’ at Thanjavur contains several bronzes of this school. The bronzes of the Raja Raja School are “more masculine and majestic and radiate a sense of power and strength, both physical and spiritual”. The Vrishvahana bronze image belongs to this school.

The beginning of modernism in Indian sculpture can be traced to the early twentieth century when Indian sculptors started adapting western academic art traditions and bringing in intense and exaggerated realism in their creations. The next phase of sculptural development is represented by artists such as D.P Roy Chowdhury, Fanindranath Bose and V. P. Karmarkar who were influenced by the monumental works of the French sculptor Rodin. The Indian modern sculpture developed a unique indigenous language only in the 1940’s and 1950’s; best represented by the works of Ram Kinker Baij, who looked afresh at both western and traditional Indian norms, amalgamating them in a modern context. The 1950’s witnessed extensive experimentation with wood and stone, in which the essential character of solid block was retained.