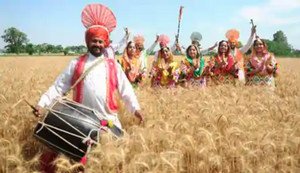 ‘Baisakhi’, derived from the month of ‘Vaisakh’, is celebrated as the New Year’s Day in Punjab. It falls on April 13 and marks the ripening of the Rabi harvest. Baisakhi is always celebrated with unusual vigour and gaiety and the performance of Bhangra. It also has a religious significance for the Sikhs as it was during the Baisakhi celebrations in 1699 A.D. that the tenth Sikh Guru Gobind Singh founded the Khalsa Panth. On Baisakhi, people gather in Amritsar to offer prayers at the Golden Temple and to have a dip in the Holy Sarovar. Sikhs visit gurdwaras and listen to kirtans and discourses and read texts from the holy Guru Granth Sahib. 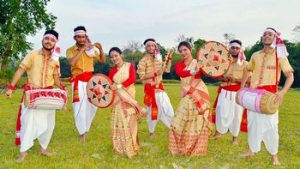 Bohag Bihu or Bhogali Bihu is the spring festival that falls on 14th April. It marks the commencement of the first month of the Assamese calendar. The festival is also referred as Rangali Bihu (‘Bihu of Merriment’). The first day of Bihu is referred as Goru Bihu (‘Cattle Bihu’) when the cattle are cleaned and decorated with garlands. The next day is celebrated as Manuh Bihu (‘Human Bihu’) when people exchange greetings on the New Year.

Bundi Festival is organised in Bundi, a town in Rajasthan and attracts a large number of foreign tourists. Several unique events are organised during this festival, which include colourful procession of camels and bullock carts. A Deep Daan or the flux of lamps is held at the famous Jaitsagar Lake. 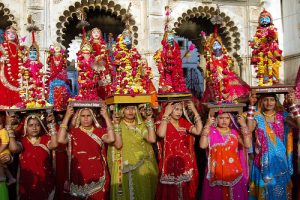 This spring festival is held in March-April in the honour of Gauri or Parvati, the goddess of abundance. Gangaur is the most important local festival in Rajasthan. Although celebrated throughout Rajasthan with great enthusiasm, the celebrations in Jaipur and Udaipur have their own charm and attraction. The festival is also celebrated with great pomp and show in Bikaner, Jodhpur, Marathwara and Jaisalmer. The tribal men and women have an opportunity to meet and interact freely and during this time, they select partners and marry by eloping. This is an unusual, romantic custom, which is sanctioned by the community. 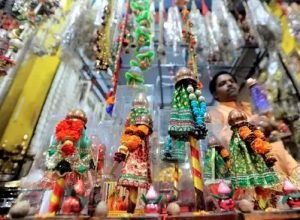 The New Year’s Day in Maharashtra is celebrated in March/April, on the first day of Chaitra as Gudi Pava. It is a day of great festivity and rejoicing. People get up early and clean their houses, decorating them with intricate rangoli designs. A silk cloth is tied to a pole with a brass goblet or kalash atop it, which is supposed to drive away evil from the house. Fresh leaves of neem tree, puran-pori and Shrikand are eaten during this festival.

Historically, Gudi Pava marks the victory of the Satavahana king Shalivahana over his enemies, about 1921 years ago.

Jwalamukhi Fair is celebrated twice a year in April and October in the Kangra Valley of Himachal Pradesh in the honour of the Goddess of Volcano.

Kartikai Festival is held in several places in Andhra Pradesh, Tamil Nadu and Kerala in the month of Karthik (October-November) in the honour of Lord Shiva.

The Khajuraho Festival of Dances was started in 1975 by the Madhya Pradesh Kala Parishad with a view to promote tourism in the state, particularly the rich architectural heritage of Khajuraho whose temples have completed 1000 years of existence. The festival imbibes the spirit of an eternal glory, where the artists and the backdrop of the Khajuraho Temples merge together in total harmony.

The Kharchi or Khmarchi festival is a celebration for worship of the tutelary deity of the royal family of Tripura in which the mythical ‘Fourteen Gods’ are worshipped. Every year the festival starts on the eighth lunar day of Asadha and continues for seven days at a stretch. 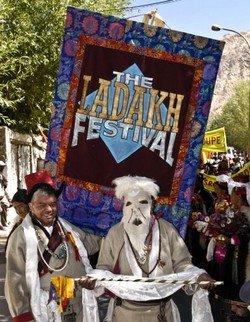 The Ladakh Festival is a major cultural event organised annually in the month of September. The festival represents the traditional culture of Ladakh, which is a mesmerizing blend of the Buddhist and Muslim cultures. The main objective of the festival is to revive and promote the richness, depth and pageantry of Ladakh’s centuries-old culture, traditions and folk heritage. One of the most attractive features of the Ladakh Festival are the colourful traditional Mask Dances performed in the monasteries by lamas wearing their ritual regalia in accompaniment to the rhythm of cymbals, flutes and trumpets. The Yak, Lion and Tashishpa dances depict the many legends and fables of Ladakh. The village archery festivals and cultural programmes presented by the local tribes form an interesting component of the festival. People throng the streets in hundreds, fabulously bedecked with gold and silver ornaments.

A major polo tournament called the “Ladakh Festival Cup” is also organised as part of the festival in which locals, particularly the Dards of Dras, display their talent at this ancient sport of the western Himalayas. In the Zanskar Valley a traditional sport called “Saka” is organised, in which a number of colourfully attired horses are used in a quaint racing competition.

Lohri is celebrated in Punjab and Haryana on the 13th day of January in the month of Paush or Magh, a day before Makar Sankranti. It is considered to be an auspicious day, when the sun makes its entry into the Northern Hemisphere (Makar Rashi). Lohri also signifies fertility and the spark of life. 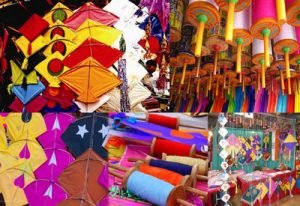 Makar Sankranti, also known as Gangasagar Mela or Til Sankranti, is celebrated on 14th January every year. It marks the commencement of the Sun’s entry into the Northern Hemisphere, signifying the onset of Uttarayana Punyakalam. It is a day of celebration all over the country wherein special dishes are prepared of sesame seeds and colourful kites are flown by children and kite flying competitions are organised. The festival lasts for four days and each of these days are known by different names, Bhogi, Sankranti, Kanuma and the last day, Mukkanuma.

Naba Barsha is the Bengali New Year’s Day, which is celebrated on April 14th. The day commences with early morning processions called prabhat pheries, which are accompanied by song and dance sequences. People take ritual dips in a river or tank and women decorate their homes by making beautiful designs on the floors (Alpana). 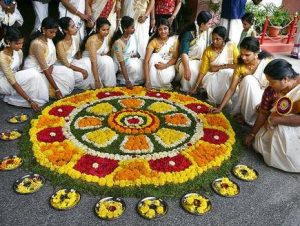 Onam is an important festival of Kerala and is celebrated in the month of August/September. It celebrates the bounties of nature and a year of good harvest. Ten days of feasting, boat races, songs and dances are part of the festivities.

According to legend, Onam celebrates the golden age of King Mahabali, the mythical ruler of Kerala. The festivities begin ten days in advance and floral decorations (Pookkalam) adorn every home. Three days before Onam, the Thrikakara Appan, or a cone shaped out of clay adorns the centre of the floral arrangements. The graceful dance of Kaikottikali is performed around the Thrikakara Appan, which is finally immersed in a pond on the fourth day or Chadayam. Caparisoned elephants in a spectacular procession, fireworks and the Kathakali dances, are an integral part of the festivities.Pulikali, also known as Kaduvakali is a common sight during Onam season.

The Vallamkali (boat race) is one of the main attractions of Onam, and is best seen at Aranmulai and Kottayam. The Onam Sandhya or the traditional feast consists of avial, kaalan, olan, erruseri, pulinji and paal ada. 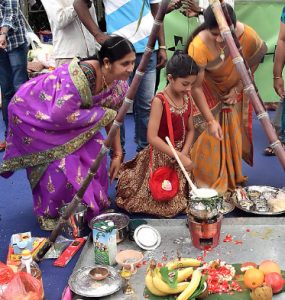 Pongal is an important festivals for Tamils that signifies the end of the harvest season and the ushering in of the Tamil month of ‘Thai’, bringing in prosperity and happiness. The Pongal celebrations are spread over four days. The day before Pongal is called Bhogi. It is celebrated as a family festival. Surya Pongal, the second day, is dedicated to the worship of Surya, the Sun God. On the third day called Maatu Ponga, the cattle are colourfully decorated with flowers. The valour of the Tamils is best illustrated in events like Jallikattu or Manjuviratt in which the youth who control the fearsome bulls are honoured and given prizes.

On the fourth day, sisters visit their brothers and enquire about their welfare. During Pongal hundreds of temples all over Tamil Nadu arrange for Sama Bandhi Virundu (community feasts) in which people from all castes and religions participate.

Raksha Bandhan is celebrated on the 15th day of the month of Shravan. It depicts the love between brothers and sisters and on this day the sisters tie rakhis on the wrists of their brothers. This is also the day when some Brahmins change the sacred thread worn by them. 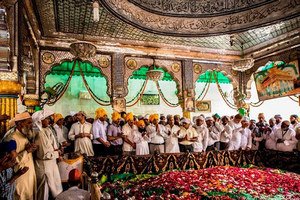 Sair-e-Gulfaroshan or Phool Walon-ki-sair is a unique three-day festival of flowers, which is a symbol of communal harmony, being celebrated by all the communities in the month of Bhadrapad at Mehrauli in Old Delhi. Pankhas or large palm-leaf fans are decorated with flowers and taken out in a procession to the darga of Khwaja Bakhtiar Kaki and then to the Jog Maya temple. The festival is of fairly recent origin, being started in the early 19th century by Queen Mumtaz Mahal wife of Mughal Emperor Akbarshah II (1806-1837) as a thanksgiving for the release of her son from imprisonment by the British.

The festival was banned by the British in1942 due to communal tensions, but was revived and restored to its original glory in 1962.

Teej is one of the most important and auspicious festivals of Rajasthan. Teej falls on the third day of the month of Shravan in July or August. It is the festival for the daughters of the house, who receive new clothes from their parents. Teej is also celebrated in Bihar, Haryana and parts of Uttar Pradesh. In Haryana it is celebrated as the Haryali Teej.

Thyagaraja was the most celebrated saint- composer of South India, who composed several Telugu songs in praise of Lord Rama and inspired several young poets and musicians. At Thiruvaiyaru, near Thanjavur, South Indian musicians gather every year during the month of January at the composer’s memorial to sing in his memory.

Vishu is a festival that welcomes the advent of spring in April/May. It falls on the first day of the month of Medam in the Malabar era. It is celebrated as the Malayalam New Year in Kerala. Fertility rituals are an integral part of this major festival. 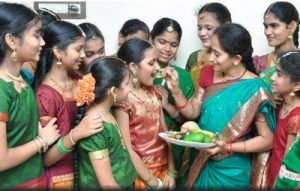 Ugadi or Chaitra suddha padhyami is celebrated as a New Year in different parts of India, particularly in Andhra Pradesh, Karnataka, Maharashtra and Goa. This festival has different names in different places such as Gudi Padwa (Maharashtra), Samvatsar Padvo (Goa), Naba Barsha (West Bengal), Puthandu (Tamil Nadu) and Vishu (Kerala). It is believed that Lord Brahma started creation on this day, which also marks the beginning of a new Hindu lunar calendar.