Shadow Theatre is a unique kind of performing art that is close to puppetry, but differs from it in the sense that while in puppet theatre the audience directly sees the puppet figures, in shadow theatre they only see the shadow cast on the screen. There is a light source and a screen and the manipulator inserts the flat figures in between by lightly pressing them on the screen so that a sharp shadow is formed. Usually, the figures in the shadow theatre are made of leather. They are carefully stencilled so that their shadows suggest their clothing, jewellery and other accoutrements. Some of the figures have jointed limbs which, when manipulated, give the appearance of beautiful moving shadows.

India has a long and rich tradition of Shadow Theatre. According to many scholars, the shadow theatre originated in India, and references to it are found in the ancient Tamil classic ‘Silappadikaram’. Many Western Indologists such as Pischel, Luders and Winternitz are of the opinion that the well-known Sanskrit drama ‘Mahaanaataka’ was originally written as a play for the shadow theatre. If this assumption is true, then this art form would be at least one thousand years old. 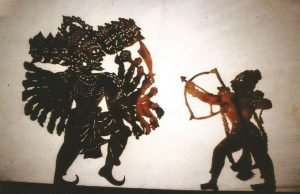 Shadow theatre is prevalent in the states of Odisha, Kerala, Maharashtra, Tamil Nadu, Andhra Pradesh and Karnataka. In the shadow theatre forms of the first three states, the shadows are black and white while those from Tamil Nadu, Andhra Pradesh and Karnataka are multi-coloured. The shadow theatre in Orissa is known as Raavana Chhaya or shadow of Ravana.  It is rather strange that in this form, while the story is based on Rama, the theatre itself is named after Ravana.

The shadow theatre in Maharashtra is known as Camdyaachaa Bahulye or Chitra Marathigaru. Here also the themes are largely drawn from the legend of Rama. In Karnataka there are two styles of shadow theatre, both known as Togalu gombeatta. One style uses very large size figures ranging from 1-1.5 metres and the other style uses smaller figures ranging from six inches to two and a half feet.  The figures are made of goatskin, which is first treated to translucency and then stenciled and coloured. The themes are drawn from Ramayana, Mahabharata and other Puranic episodes. The theatre form came into Karnataka from its organizer Kattare Kalachari who hailed from Maharastra. The shadow theatre in Karnataka is also referred as Killekyathru. There are several families which perform in their respective areas and are known by different names such as Gombberama Chakkai Gobbeyata, Togalu Gobbeyata. Thol Pava-Kuthu or Pavaikottu, the shadow theatre of Kerala again thrives exclusively on the stories of Rama. Andhra Pradesh has the strongest tradition in shadow theatre, which is known by the name Tholubommalata. Here, the figures range in height from 1.2 to 1.82 metres and are the largest among the other shadow theatre forms.