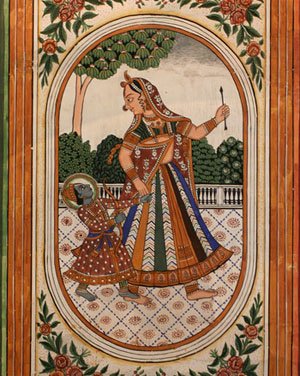 The Shekhawati havelis of Rajasthan are renowned for their wall paintings. These havelis were profusely painted with frescos depicting gods and kings, flowers and arabesques and scenes from everyday life. The Shekhawati paintings also depict Europeans, identified by their hats in a sea of turbans, as infantry in opposite sides. The technique of Fresco painting in Shekawati was not primitive or unique to the area but very close to the Italian Fresco technique developed around the 14th century. In Shekhawati the fresco painters were called Chiteras and belonged to the caste of Kumhars or Potters. They were also called Chejaras, masons, since they performed both functions of painting as well as building construction.

Initially only vegetable pigments were used for colour like Kajal (Lamp black), Safeda (Lime) for white, neel (indigo) for blue, geru (red stone) for red, kesar (saffron) for orange and pevri (yellow clay) for yellow ochre. Later chemical pigments and synthetic dyes from Germany and England were also used. The Chhatris at Narhad (built 1508 A.D.) and Jhunjhunu (built by Hansa Ram in 1680-82 A.D.) are fine specimens of this form of painting.