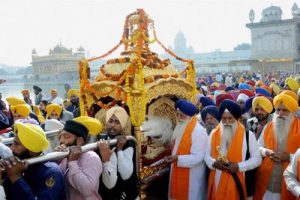 The birth anniversaries of each of the ten Sikh Gurus are celebrated as Gurpurabs. The most important of the Gurpurabs are the birth anniversaries of Guru Nanak and Guru Govind Singh and the martyrdom days of Guru Arjun Dev and Guru Teg Bahadur. The birth anniversary of Guru Nanak Dev, which falls in the months of October- November, is enthusiastically celebrated by Sikhs as Guru Nanak Jayanti. The festivities include Akhand pathas, kar seva and the Prabhat Pheris or congregational singing of shabads (hymns). At the conclusion of the festivities, the Guru Granth Sahib is carried in a procession on a decorated floral float, which is led by five armed guards carrying Nishan Sahibs (Sikh flags), who symbolically represent the Panch Pyares. 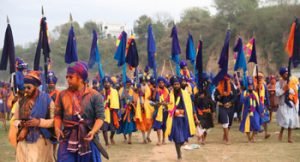 Hola Mohalla is an annual festival that is celebrated in the month of Phaguna, next day after Holi and is held at Anandpur Sahib in Punjab. The festival was started by the tenth Sikh Guru Gobind Singh in 1700 A.D. as a gathering of Sikhs for military exercises for displaying their valour and defence preparedness at a time when Sikhs were engaged in battles with the Mughal Empire. During this festival the Nihang Singhs or the Akalis, who claim to be the descendents and warriors of the Sikh army founded by Guru Gobind Singh, carry out mock battles (Gatka) and displays with swords and horse riding. The festival is also an occasion for the Sikhs to reaffirm their dedication to the Khalsa Panth. The ceremonies involve performance of akhanda pathas, singing of shabads and kirtans and offering of kar sevas throughout the day.