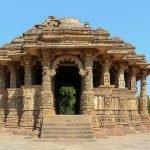 The Solanki style of temple architecture flourished in Gujarat. A Solanki typical temple plan consists of a closed hall (‘sanctum’) and a porch that are inter-connected both internally and externally. A detached peri-stylar hall is added in larger temples in the same axis, which is often preceded by a ‘torana’ or ornamental arched entrance. These temples were largely built in sandstone or limestone. The Sun Temple at Modhera, completed in 1027 A.D., ‘Vemala Temple’ at Mount Abu (11th century) and the ‘Somnath Temple’ at Kathiawar (12th century) are outstanding examples of the Solanki architecture.