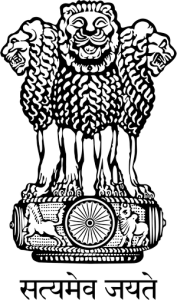 The State Emblem is an adaptation from the Sarnath Lion Capital of Ashoka, near Varanasi in Uttar Pradesh. It depicts four lions, standing back to back. The four lions symbolizing power, courage and confidence, rest on a circular abacus. The abacus is girdled by four smaller animals, which are guardians of the four directions: the lion of the north, the elephant of the east, the galloping horse of the south and the bull of the west. The abacus rests on a lotus in full bloom, exemplifying the fountainhead of life and creative inspiration. Carved out of a single block of polished sandstone, the capital is crowned by the Wheel of the Law (‘Dharma Chakra’). The motto ‘Satyameva Jayate’ (meaning ‘truth alone triumphs’) from ‘Mundaka Upanishad’ are inscribed below the abacus in Devanagari Script.

The Lion Capital was erected in the third century B.C. by Emperor Ashoka to mark the spot where Buddha first proclaimed his gospel of peace and emancipation to the four quarters of the universe. The National Emblem is thus symbolic of contemporary India’s affirmation of its ancient commitment to world peace and goodwill. In the State Emblem, adopted by the Government of India on 26th January 1950, only three lions are visible, the fourth being hidden from view. The wheel appears in relief in the centre of the abacus with a bull on right and a horse on left and the outlines of other wheels on extreme right and left. The bell-shaped lotus has been omitted.