The Mauryan dynasty crumbled after Ashoka’s death in 232 B.C. In its wake came the Sungas and Kushans in the North and the Satavahanas in the South. The period 2 B.C. to 3 A.D. marked the beginning of the sculptural idiom in the Indian sculpture where the elements of physical form evolved into a more refined, realistic and expressive style. Advances in art and architecture were made under these dynasties in areas like stone construction, carving and symbolism. The period also witnessed the beginning of the ‘Chaitya hall’ and the monastery (‘Vihara’) constructions.

Under these dynasties the Ashokan stupas were enlarged and the earlier brick and wood works were replaced with stone-works. The Sanchi Stupa was enlarged to double its size in 150 B.C. and extended with the addition of gateways. Likewise, the railings around the Barhut Stupa were reconstructed under the Sungas, who also built the ‘toranas’ or the gateways to the stupas. An inscription at the Barhut Stupa indicates that the ‘torana’ was built during the reign of the Sungas i.e. 184-72 B.C. These ‘toranas’ indicate the influence of Hellenistic and other foreign schools in the Sunga architecture.​ 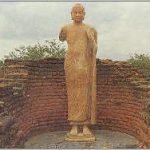 The Satavahanas were great patrons of art and architecture and constructed a large number of stupas at Goli, Jaggiahpeta, Bhattiprolu, Gantasala, Nagarjunakonda and Amaravati . During the Kushan period (1-3 A.D.), the Buddha was represented in human form instead of symbols. Another feature of this period was that the emperor himself was shown as a divine person. The Kushans were the pioneers of the Gandhara School of Art and a large number of monasteries, stupas and statues were constructed during the reign of Kanishka.