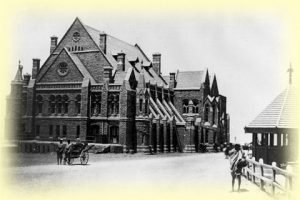 ‘Kalidas’, the first Tamil talkie was screened in 1931, which was directed by H.M.Reddy, with T.P.Rajalakshmi playing the lead role. The first sound studio in South India, ‘Srinivasa Cinetone’, was started in 1934 by A.Narayanan. T.P.Rajalakshmi was the first female producer and director of Tamil films who made the film ‘Miss Kamala’ in 1936. Raja Sandow (1894-1944) was an acclaimed silent film star, filmmaker and producer, who directed several Tamil and Telugu films in Bombay and Madras. His films include ‘Anaadhai Penn’ (1929), ‘Parijatha Pushpaharanam’ (1932), ‘Menaka’ (1935), ‘Chandrakantha’ (1936) and others. In the film ‘Sevadasan’ the legendary singer M.S. Subbalakshmi played the lead role. D.K.Pattamal sang the first playback song for the long documentary ‘Mahatma Gandhi’ (1940) by A.K.Chettiar. The film ‘Thukkaram’ (1938) with M.Subramani Iyer in the lead marked the beginning of the popular cinema in Tamil. 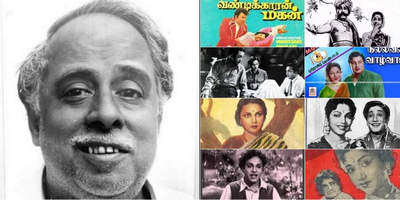 A.V.Meiyappan (1907-1979) created sensation in the South Indian cinema by introducing playback singing in his film ‘Nandakumar’ (1938). He also launched the AVM-banner of movies and produced the first ‘dubbed’ film in Tamil, ‘Harishchandra’ (1943), which was dubbed from Kannada. The ‘Gemini Studios’ were launched in early forties, which gave great hits like ‘Madhana Kamarajan’, ‘Nandhanaar’ and ‘Chandralekha’. C.N.Annadurai wrote the script for ‘Velaikkari’ (1949), which set a new trend in Tamil films. He later went on to become the Chief Minister of Tamil Nadu. Other Tamil cine personalities who joined politics and became the Chief Minister of Tamil Nadu include M.Karunanidhi, M.G.Ramachandran and Jayalalitha.

Modern Theatres ‘Alibabhavum Narpathu Thirudargalum’ (1955) was the first full-length colour film to be produced in Tamil. The first cinemascope film in Tamil was ‘Rajarajacholan’ (1973), while the first Tamil 3D film was ‘Annai Bhoomi’ (1985) and the first 70 mm Tamil film was ‘Maveeran’ (1986). The Tamil film to be completed within twenty four hours was ‘Swayamvaram’ (1998) produced by Giridharilal Nagpal.