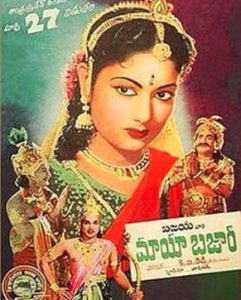 The first talkie film in Telugu was ‘Bhakta Prahlada’ (1931), which launched Surabhi Kamalabai as the first Telugu heroine. The Telugu company ‘Saraswati Talkies’ was launched in 1935 with the film ‘Draupadi Vastrapaharanam’. The Nidamarthy Brothers constructed the first film studio at Rajahmundry in 1936. The first social film in Telugu, ‘Prema Vijayam’ and the first film with only children in the casting, ‘Aanasooya-dhruva’ were produced in the same year. A big turning point in Telugu cinema was the film ‘Girhalakshmi’ (1937), whose revolutionary story prompted many other social films like B.Nagi Reddy’s ‘Sumangali’, Gudavalli Ramabrahman’s ‘Malapilla’ (1939) and ‘Raitu Bidda’. The first male playback song in Telugu was recorded for the film ‘Vandemataram’ (1939). Since it was a child’s voice, M.S.Rama Rao’s song in ‘Devata’ (1941) is acknowledged as the first “male” playback. The first female playback song was recorded for ‘Bhaktapotana’ (1942). 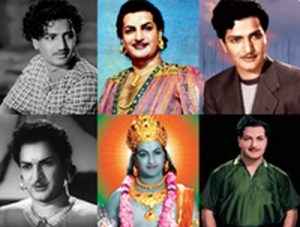 ​The first full-length colour production in Telugu was ‘Lavakusa’ (1963). The first full-length black and white cinemascope film in Telugu was ‘Oka Nari-vanda tupakulu’ (1971), while the first full-length colour and cinemascope film was ‘Alluri Sita Rama Raju (1974) and the first 70 mm production was ‘Simhaasanam’ (1987). Dasari Narayan Rao is considered as one of the luminaries among the Telugu filmmakers whose ‘Premabhisekham’ was a great hit at the box-office. S.P.Balasubrahmanyam made his debut in the film ‘Sri Sri Sri Maryadaramanna’ (1967), while Sobhanbabu and Krishna made their debut in Telugu cinema in 1960 and 1965 respectively. Chiranjeevi, who recently floated a political party, has been a popular star in the contemporary Telugu cinema.