Temples form the backbone of the Indian medieval architectural heritage. Despite the vast geographical span of the country and influence of different dynasties, Indian temple architecture is remarkably uniform. Two broad styles can be identified, each having several sub-styles. The ‘Indo-Aryan’ or the ‘Northern’ style is marked by a tower with rounded top and curvilinear outline while the ‘Dravidian’ or the ‘Southern’ style is typified by towers that are usually in the shape of a rectangular truncated pyramid. 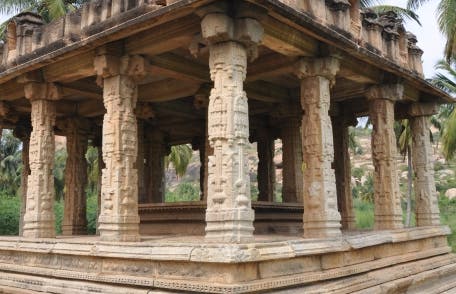 The typical plan of a Hindu temple has remained essentially the same from the 6th century A.D. until the present, both in the North and in the South. The sanctuary or the ‘vimana’ has the upper and outer pyramidal tapering portion called the ‘shikhara’ or pinnacle. The ‘vimana’ is a rather dark place that houses the divine deity in a small area called ‘garbha griha’. The entrance is reached through a ‘mandapa’ or pillared hall, where devotees congregate for prayers. In certain earlier temples like the ‘Shore Temple’ in Mahabalipuram (700 A.D.), the ‘mandapa’ was situated at a little distance from the main temple, although this practise was done away with in later constructions. Later it became necessary to unite both the buildings, making way for the ‘antarala’ or intermediate vestibule. Sometimes a smaller room or porch called ‘ardha mandapa’ leads up to the ‘mandapa’ or a bigger hall called the ‘maha mandapa’. A tower generally surmounts the shrine-room, while smaller towers rise from other parts of the building. The whole complex is conceptualized in a rectangular courtyard, which was often placed on a raised platform and sometimes contained lesser shrines. The best examples of temples following this plan are the Khajuraho temples.