The folk theatre of Andhra Pradesh, with its multiple forms and techniques, has been a major source of public entertainment through the centuries. It served the dual purpose of providing entertainment to people and also making forceful emotional appeal to eradicate many social evils. Many references are found in the early Telugu literature, which show the popularity of this art form during the 12th century A.D. The Vira-Saivite poet Palkuriki Somanatha mentions in his well-known work ‘Panditaradhya Charitra’ about such dramatic performances at the Srisailam Hill on the occasion of ‘Mahashivratri’. It is thus evident that the folk theatre tradition in Andhra can be traced back to the period of Kalyani Chalukyas, if not earlier. Palkuriki Somnatha composed one of the very early forms of indigenous musical drama known as ‘Bahu Naraka’ around 1250 A.D. which portrayed the ten varieties of the ‘Shivalila’ episodes. With time, these took the form of the ‘Yakshagana’ plays, common to many regions of India. The other major forms of the Telugu folk theatre are ‘Burra Katha’, ‘Veethi Bhagavatamu’ and the leather puppet show, ‘Tolubommalatalu’. 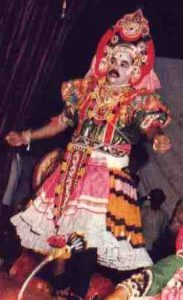 ​Yakshagana is perhaps the oldest and most popular theatre form in Andhra Pradesh as well as Karnataka. In the earlier days, the Yakshagana shows were presented in the royal courts. Kandakuri Rudra Kavi, who was one among the eight famous court poets of Krishnadevaraya of Vijayanagara, composed the earliest Yakshagana work, ‘Surgriva Vijayamu’. After the fall of the Vijayanagara Empire, this tradition was patronised by the Nayaka kings of Madurai and Thanjavur, particularly Vijaya Raghava Nayak of Thanjavur and Shahji of Maharashtra. Vijaya Raghava Nayak introduced a number of novelties to improve the tradition of Yakshagaana. He composed a number of plays like ‘Raghunathabhyudaya’, ‘Kaliyamardana’, ‘Prahlada Charitra’, ‘Putanaharana’ and ‘Vipranarayana Charitra’. The Yakshagana plays of Andhra Pradesh were largely descriptive in style. The dancers came from a particular community known as ‘Jakkula Varu’, who specialized in Yakshagana. From being a musical play with dance interpreted by only one artiste, Yakshagana developed into a regular dramatic dance form with a number of artistes playing the various characters in the story. Three well-known Yakshagana plays belonging to the 15th and 16th centuries A.D. are ‘Garudachalam’ by Obayya Mantri, ‘Krishna-Hiramani’ by Srinddha and ‘Sugriva Vijayam’ by Rudra Kavi. The prototype of what is Yakshagana in Andhra Pradesh, Karnataka and Tamil Nadu, is referred as ‘Lalita’ in Maharashtra, ‘Bhavai’ in Gujarat and ‘Gandharva Gana’ in Nepal.

​Burra Katha is the most popular and the most extensively used narrative form of folk singing in Andhra Pradesh. It gets its name from “burra”, the percussion instrument used in the narrative. Burra Katha was actually developed to create social awareness by conveying contemporary messages but with time it began to be exploited to serve political purposes. The Burra Katha team consists of three narrators. The chief narrator coordinates the narration assisted by two “vanthas” or co-narrators, who provide the rhythm during narration by means of small drums and gives their chorus voice. The Burra Katha team recites traditional stories of ‘Bobbilli Katha’ and ‘Palnati Yuddham’. 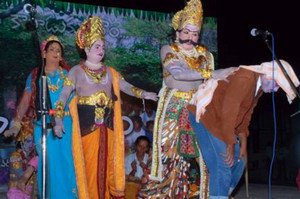 Another form of folk theatre in Andhra Pradesh (and also in Telangana), which has been popular amongst the village-folk, is the Veethi Bhagavatamu or Chindu Bhagavatam, a degraded form of Yakshagana. It was practised by the members of various communities viz., Yamadulu, Chindumadigalu, Jangalu and Jakkulavaru.

History goes that within the ‘Madiga’ community, a sect considered itself ‘Pedda Madiga’ (Big madiga) and another sect that was living on begging, performing yakshaganas, as ‘Chinna Madigas’, (Small madiga). These Chindu Bhagavatas were not permitted to perform beyond their own community. The word ‘Chindu’ in Telugu means ‘jump’. As their presentation is interspersed with leaps and jumps, it gained the name of Chindu Bhagavatam.

Most of the stories narrated are from the Mahabharata, Ramayana, the Bhagawata and Shiva Purana. The performance does not require any fixed stage. These shows take place mostly on the outskirts of a village where a thatched stage is erected, supported by four bamboo poles fixed on the ground.

It is believed that currently there are 800 Chindu Bhagavata troupes, each comprising at least 15 members, all male. The members are trained in the art of make up, singing and playing musical instruments like harmonium, cymbals and Dholak. 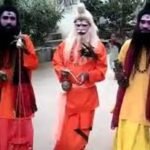 Pagati Veshaalu is role-playing by donning a costume and assuming another’s role. It is popular in the Telangana region and in the Krishna district of Andhra Pradesh. Each performance revolves around a single episode consisting of a prominent “vesham” (disguise) and other less important characters. Pagati Veshaalu is performed consequently for four to five days and each day’s performance centres around one character.