The objective of this form of folk dance was to provide entertainment for the masses. It has secular themes ranging from romance, love and valour to social and cultural traditions. 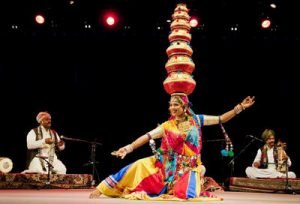 ​Bhavai is the popular folk theatre form of Gujarat and Rajasthan. Initially, the Bhavai performance was presented only during the religious festivals of ‘Navratra’, but it soon got converted as an important form of the theatre of entertainment. The Bhavai has a series of playlets known as ‘Vesha’ or ‘Swanga’, each having its own plot and locale. Themes may be mythological, social, royal and contemporary. The music is a combination of classical tunes rendered in folk style and the musical instruments used are ‘Bhungala’, ‘Jhanjha’ and tabla. Dancing is an indispensable feature of Bhavai and is a combination of ‘Rasa’ and ‘Garba’ with traces of Kathak. The performers of the Bhavai are called ‘Bhavayas’ while the ‘Sutradhara’ or anchor is known as ‘Nayaka’, who sings, acts and directs. Asait Thakore was the pioneer of Bhavai, who wrote over 360 Veshas. 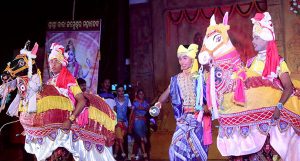 Chaiti Ghoda dance is one of the popular folk dance forms of Odisha specially performed by aboriginal fishermen tribes like the Keot (Kaibarta). The ‘Chhaiti Ghoda’ troupe of performers comprises of two players on the musical instruments ‘dhol’ and ‘mohuri’ and three other characters. A dummy horse is improvised out of bamboo and cloth and the dancer enters into the hollow body and dances, while the main singer delivers mythological discourses.

The dance is sometimes accompanied by a narative form called ‘Daskathia’ in which a devotee narrates a story dramatically to the accompaniment of a wooden musical instrument called ‘kathia’. This is a performance of two narrators, ‘Gayaka’ (chief singer) and ‘Palia’ (co-narrator).

Gondhal is a dramatic and ritualistic folk narration form of Maharashtra and Karnataka, whose tradition goes back to ancient times. It was particularly popular among the Bhils of the Chalukya dynasty.

Garodas is the art of narrating stories with the help of painted pictures in Gujarat, mainly by the members of the ‘Garoda’ community.

Raslila is a dance-drama that evolved around the 15th-16th century A.D. Its themes are centred on the Krishna legend.

Jatra or Yatra is one of the most popular folk theatres in India, especially in the Eastern India. It originated in Bengal as a ritual theatre and is generally an open-air performance. The illustrious Vaishnava saint Chaitanya used the medium of Jatra to propagate his teachings of Krishna by inspiring his devotees to participate in community singing and dancing. Apart from the exploits of Krishna, the Jatras dramatised the Puranic legends, folk-tales and episodes from the Ramayana and the Mahabharata. The famous playwrights or ‘palas’ of West Bengal attempted to bring about structural perfection in the Jatra and were referred by various names like ‘Rama Jatra’, ‘Shiva Jatra’ and ‘Chandi Jatra’. Later secular themes, historical romances, love stories and even patriotic themes were added to the repertoire of Jatra. In Puri in Orissa, a unique form of Yatra is performed as a kind of street theatre, which is known as ‘Sahi Yatra’.

Kariyala is the most interesting and popular folk drama of Himachal Pradesh, particularly in the districts of Shimla, Solan and Sirmour. It is an open-air performance, which comprises of an entertaining series of small playlets, farces, skits, revues and burlesques. It is generally staged during village fairs and festive occasions and is performed throughout the night.

Keertan is the most popular narrative form which is practised in different parts of the country and is known by different names such as ‘Katha Kalakshepam’ and ‘Harikatha’.

Khyal is a popular folk dramatic form of Rajasthan, which is full of dancing, singing and music. Khyal is known by different names like ‘Tamasha’, ‘Rammat’, ‘Nautanki’, ‘Maach’ and ‘Swang’ in different regions of Rajasthan.

Maanch is a form of operatic ballet that is very popular in the Malwa region of Madhya Pradesh. It is generally performed in open air and its themes are based on mythological episodes or romantic folk tales. In Maanch the dialogues are set to different tunes called ‘Rangat Dohas’. Maanch seemed to have an indigenous origin in Ujjain in the 17th century A.D.

Nachya is a popular folk theatre form of the Chhatisgarh region. There are two types of Nachya theatre – the humorous ‘Gammat Skit’ and the ‘Jokad Pari’ performance. 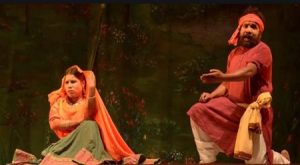 Nautanki, an offshoot of the Swang, has reigned as North India’s most popular form of entertainment for nearly a century. The first mention of Nautanki is found in Abdul Fazal’s ‘Ain-e-Akbari’ (15th century A.D.). Nautanki’s origins lie in the folk performance traditions of ‘Bhagat’ and ‘Raslila’ of Mathura and Vrindavan in Uttar Pradesh and ‘Khyal’ of Rajasthan . The themes of a Nautanki performance may be based on mythological, historical, social or folk tales. The performance starts with the beating of a big drum called ‘Nagara’. In Nautanki music and dance take precedence over acting. There are two important Schools of Nautanki i.e. ‘Kanpur’ and the ‘Lucknow’ Schools. Gulab Bai is regarded as the first female actor in Nautanki. 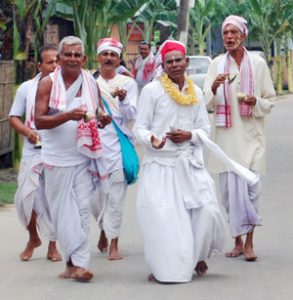 ​Oja-Pali is an interesting form of story telling of Assam in which many dramatic techniques are utilised to illustrate the narrative and enhance its visual impact. This art form is associated with the worship of Manasa, the serpent goddess of Assam. The performers take many days to narrate the story, which is divided into three parts: Deva Khanda, Baniya Khanda and Bhatiyali Khanda. The Oja is the main narrator-singer and the Palis are his associates or members of his chorus.

There is yet another type of Oja-Pali parties in Assam, known as the Vyah-Gowa Oja-Pali, which narrates stories from the Assamese version of Puranas and the epics.

Pandavani is a popular form of humorous story telling practised by the tribals of the Chhatisgarh region. The main theme of the narrative revolves around the story of the Pandavas. It is considered to be of two types – ‘Kapilak’ and ‘Vedamati’.

Picture Showmen is an art of narrating the story with the help of pictures dating back to the 6th century B.C. It was known as ‘Mankha’ in the ancient times.

Powada is the narrative hero-lauding practised in Maharashtra. The first available Powada in Marathi was written on the thrilling episode of Shivaji killing his adversary Afzal Khan. The tradition of Powada singing was kept alive by the folk singers of Maharashtra known as ‘Gondhalis’ and ‘Shahirs’. 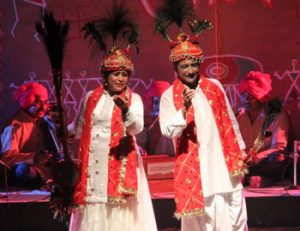 ​Swang is the major theatrical tradition of folk entertainment in North India, especially Haryana and Punjab. It is a musical folk drama in which stories are enacted in verse and are sung in popular folk musical modes. The accompanying musical instruments include the ‘ektara’, ‘dholak’, ‘kharta’, ‘sarangi’ and harmonium. Ali Baksh of Rewari is the pioneer of the Swang tradition. He is regarded as ‘the Father of folk theatre in Haryana’. Pandit Deep Chand modified and polished Ali Baksh style of folk theatre. He is fondly referred as the “Kalidasa of Haryana”. 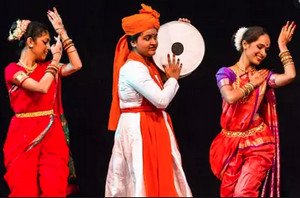 Villu Pattu, which literally means ‘bow-song’, is a form of group recitation using a bow-shaped musical instrument. The themes include stories from Ramayana, Mahabharata and the Puranas, which are narrated in a ballad style. This folk theatre form developed in the 15th century A.D. in Tamil Nadu.