The state of Karnataka boasts of a fascinating variety of folk theatre forms. Groups of actors, from the rural strata, travel from one village to another, enacting plays in street corners or elaborate ‘mandapas’. 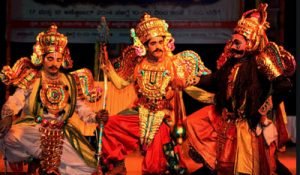 The folk theatre of Karnataka, Bayalata (open air theatre) has derived its form from religious rituals. All folk performances are part of a ritual festival conducted in the name of the local deity. Dasarata, Sannata, Doddata, Parijata and Yakshagana are the five types of Bayalata commonly performed. In Parijata and Yakshagana a single narrator – sutradhar – controls the story, while the other forms comprise a chorus of four to five narrators, aided by a Vidhushaka or jester.

The Dasarata is performed by a group of dasas (mela) men and women who enact themes of Radha and Krishna with the aid of vibrant gestures. This popular style has been adapted by the Marathi theatre as Tamasha.   Sannata, or the small play, is an improvisation of the Dasarata. Sannata has a full-length story that spans around six hours, instead of several small stories. Sannata works on three distinct themes – the Vaishnavite theme, the Shaivite theme and the social theme. Unlike the other styles like the Yakshagana, Doddata and the puppet plays, Sannata brings the folk theatre to the social plane.

The Parijata, like the Sannata is also an opera, where the actor summarizes and explains the song. The key character is the Bhagvata, who doubles up as narrator and clown. The main story is based on the mythological romance of Krishna and Rukmani-Satyabhama. The Doddata is a combination of verse and prose. The performances are on an extravagant scale, with gorgeous costumes, grand stage and several characters shouting ‘shabaash’.

​Tal-Maddale is the narrative drama of Karnataka which is the predecessor of Yakshagana. ‘Tal’ is a kind of cymbal and ‘Maddale’ is a kind of drum. ‘Tal-maddale’ is a play without costumes, make-up, dance or acting and is performed in sitting position. The chief narrator is called ‘Bhagavata’ and his associates are called ‘Arthadharis’.