Kerala is rich in theatre forms. The three principle ones include Theyyam, Krishna Attam and Kakkarissi Natakam.

The ritualistic Bhuta theatre of Kerala is known as Teyyam or Teyyattam. The word Teyyam is derivative of Sanskrit Daivam meaning God. The 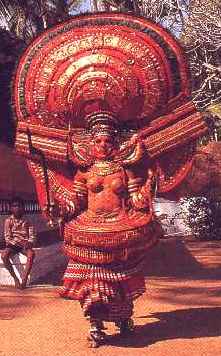 Teyyams are the representations of folk and tribal deities worshipped in various forms. Any object inspiring reverence, awe and fear was made into Teyyam by the folk and tribal communities and worshipped with appropriate rituals which included dance, drama, music and poetry.

It is not merely a dance but a cult, which is inseparable from the Hindu practices of the region. It is widely agreed that Teyyam existed before the arrival of the Aryans. Elaborate descriptions of such rituals are found in the Tamil literature of the Sangam period (500 BC – 500 AD). In the 8th century, Shakti-pooja was an extremely popular ritual which, towards the late 13th century, was influenced by the Vaishnavite movement. Prior to the Shakti-pooja, there existed a fertility cult of worshipping the mother goddess, and its association with Teyyam is well known.

Most Teyyam performances are public and are performed at temple festivals to honour the spirits as well as for the general well being of all present. When the entire village commissions a performance, it is known as Otta Kolam. Apart from the costume, the performer wears profusion of ornaments and, in most cases, a distinctive crown. Every Teyyam presentation has two parts, the Tottam or Vellattam, which involves preliminary ceremonies, and the spirited calling upon the deity for inspiration, and the dance proper. The accompanied instruments include drums, pipes and cymbals. The Teyyam stories are sung and danced, dramatised and enacted in various colourful festivals associated with various village shrines. In Ayappan Tiyatta, a ritual performance in Kerala, the story of god receives special elaboration through a form of visual story telling prior to the visitation of the deity. 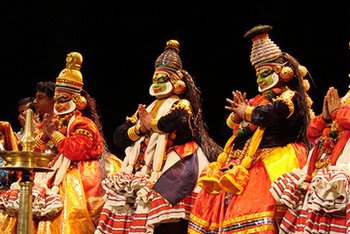 Krishnanattam or Krishnattam is a colourful dance-drama based on the Krishna legend, which emerged around the mid-17th century. Manaveda (1585–1658 A.D.), the then Zamorin Raja of Calicut in northern Kerala is credited with the creation of Krishnanattam. The performance is based on Krishnagiti (Krishna Geethi), a text of slokas and padams in Sanskrit, composed by Manavedan in 1654. It is believed that the Zamorin had a vision of Krishna who gave the king a peacock feather, which became the living symbol of this dance-drama. Krishnanattam players wore a peacock feather and thus commemorated the vision of the chieftain.

Krishnanattam is a cycle of eight plays that are performed for eight consecutive nights to unfold the entire story of Lord Krishna. The style is almost similar to Kathakali. The eight plays are: Avataram, Kaliyamardanam, Rasakrida, Kamsavadham, Swayamvaram, Banayuddham, Vividavadham and Swargarohanam. In some plays, the same actor appears in different roles. For example, in Swayamvaram the same actor appears as Sandipani and Rukmini. The roles of Dhantavakthra and Satrajit are played by the same actor. The roles of Uddhava, Muchukunda, Sisupala and Rukmi are also played by one actor.

Krishnanattam survives in its glory at the Guruvayur Sri Krishna temple in the Thrissur district of Kerala under the management of Guruvayur Devaswom. 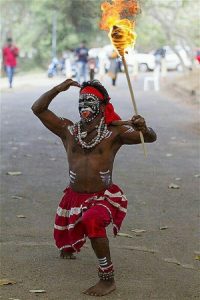 Kakkarissi Natakam (also called Kakkarissikali or Kakkarukali) is a satirical comedy-based folk dramatic forms of entertainment in Kerala. It is believed that the art form originated from another art form ‘Kakkarissi Vedarukali’ of Malavedar in Tamil Nadu. This art form is more popular in the southern regions of Kerala. It is a form of musical drama and the language used is a blend of Tamil and Malayalam.