Tibetan Buddhism, also called ‘Lamaism’, is a predominant religion of Tibet, Mongolia and other parts of the world. In India it is practised by over 120,000 Tibetans in their different settlements at Dharamshala, Kushalnagar (Karnataka), Darjeeling, Arunachal Pradesh, Sikkim and Ladakh. The Tibetan Buddhism is “essentially Buddhism of the Mahayana school, with elements of modified Shaivism and native ritualistic Shamanism”. Monks belonging to this sect of Buddhism are described as ‘lamas’. It is believed that the first order of ‘Lamas’ or monks was established in 747 A.D. by Padmasambhava, a Buddhist scholar and monk, who went to Tibet from northern India.

The Tibetan Buddhism follows a strict code of traditional hierarchy. The supreme position is occupied by two ‘lamas’— namely, the Dalai Lama (Grand Lama) and the Panchen Lama (Bogodo Lama). Of the two, the Dalai Lama is more powerful and is considered as the spiritual head of the Tibetan Buddhism, while the Panchen Lama is the second most senior religious authority. Spiritual dignitaries (‘Hutukhtus’) such as the ‘Rimpoches’, ‘Hobilghans’ or ‘Bodhisattvas’ form the third level of authority.

Dalai Lama: The Dalai Lama is the spiritual leader of the Tibetan Buddhism and is considered as a reincarnation of the Buddha. The first to bear 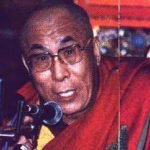 the title of the ‘Dalai Lama’ was Sonam Gyatso, Grand Lama of the Drepung monastery and leader of the Gelugpa (‘Yellow Hat’) sect in 1578. In the 17th century, the 5th Dalai Lama assumed spiritual and political leadership of Tibet and was considered as a manifestation of ‘Chenrezi’ or the ‘Buddha of Mercy’, who would always take a rebirth. The present and the 14th Dalai Lama, Tenzin Gyatso, was identified and enthroned in 1940, with the Potala Palace in Lhasa as his traditional seat of government. After the Chinese annexation of Tibet in 1950, the Dalai Lama fled to India in 1959 and established a Government-in-exile at Dharamshala in Himachal Pradesh.

Panchen Lama: The word ‘Panchen’ means ‘great scholar’. The first Panchen Lama was the ‘guru’ of the 5th Dalai Lama, who consigned him the Shigatse monastery. Following the death of the 10th Panchen Lama in 1989, the Dalai Lama recognised the five-year old Gedhun Cholkyi Nyima as his reincarnate. The Chinese, however, arrested the child and nominated its own Panchen Lama, Gyancain Norbu. The other Lama is still not traceable.

Rimpoche: A senior monk, believed to be a ‘Boddhisatva’ manifestation of Buddha is known as Rimpoche.

The scriptures of Tibetan Buddhism are divided into two great collections: the ‘canon’, or sacred books, and the ‘exegetical commentary’. The ‘canon’ consists of counsels and injunctions of the Buddha rendered from the Indian and Chinese texts.