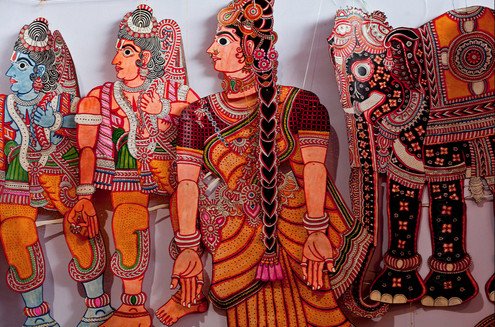 Tolubommalata is a 700-years old leather puppetry shadow theatre tradition found in the Telugu speaking areas of South India like Andhra Pradesh and parts of Karnataka and Tamil Nadu. Very little is known of its form or its practitioners prior to the late 1950s, when scholars first began to scrutinize it and publish their findings.

In Tolubommalata, the puppets range in height from 1.2 to 1.82 metres and are made from dried skins of goats. The skins, once dried, become translucent and allow the light to pass them. As a result, when the puppets are placed upon a white screen and a light is placed behind them, the light passes through the puppets and they appear in full colour on the screen, an illumination rather than a shadow.

One of the popular themes in a Tolubommalata performance is ‘Lanka Dahanamu’ or the ‘Burning of Lanka’. Most of the Tolubommalata puppeteers are Marathi speakers, indicating a profound influence of Marathi theatrical genres upon the south Indian and Telugu performing traditions.