By the 16th century almost all of southern India was part of the Vijayanagara Empire (1336-1565 A.D.), whose rulers were great patrons of art and architecture. The Vijayanagara style of art inherited aspects from three main regional styles of art i.e. the Dravidian style of the Cholas and the Pandyas, the Chalukya-Hoysala tradition and the Indo-Islamic art of Bijapur. 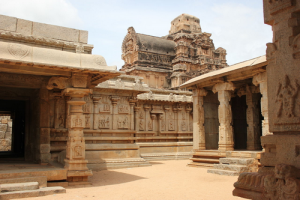 ​The Vijayanagara rulers built strong fortresses, gorgeous palaces and beautiful temples. The characteristic feature of the Vijayanagara temple architecture is the development of the temple complex, comprising of concentric series of rectangular enclosure walls with the ‘gopurams’ (towered gateways) in the middle of each side. The construction of several ‘mandapas’, the ‘Kalyana mandapa’ being the most conspicuous among them, was another notable feature of the period. The temples also had the “Devi Shrine” to keep the replicas of the consort of the deity. The Vijayanagara tradition shows a distinct scheme of decoration in terms of architectural space. Decorative friezes are utilised horizontally on the plinth moulding, caves and pillars of the temple interiors. They appear vertically on the composite pillars, plasters of the walls and doorways of the ‘gopurams’ as well as the inner part of temples. Another noteworthy feature of the temples is the absence of mortar in their construction.

The city of Vijayanagara was studded with so many temples that it was called ‘Kovilapura’. Of the numerous Vijayanagara complexes in southern India, the most magnificent are those at Kanchipuram, Thiruvannamalai and Vellore. The ‘Temple of Pampapati’, the ‘Hazararama Temple’ and the ‘Vittalaswami Temple’ are best examples of the Vijayanagara architecture. This period also witnessed the construction of several secular structures like the ‘Lotus Mahal’ and elephant stables, which show strong Islamic influence.